“Our anniversary is coming up.”“Oh, right.“ Emily replied. “April…26th?”“It’s the 24th this year!” I chided with mock outrage, neglecting to mention I peeked at the framed wedding invitation in our kitchen for the answer.I’m certainly in no position to comment on the finer details of matrimony. When it was time to select a wedding band for myself I opted for a $20 tungsten ring from Amazon. I added it to an order of dog treats and forgot about it until the week of our wedding. At which point I realized that in my haste to give Eko and Penny their new snacks I had thrown out my ring with the shipping box. 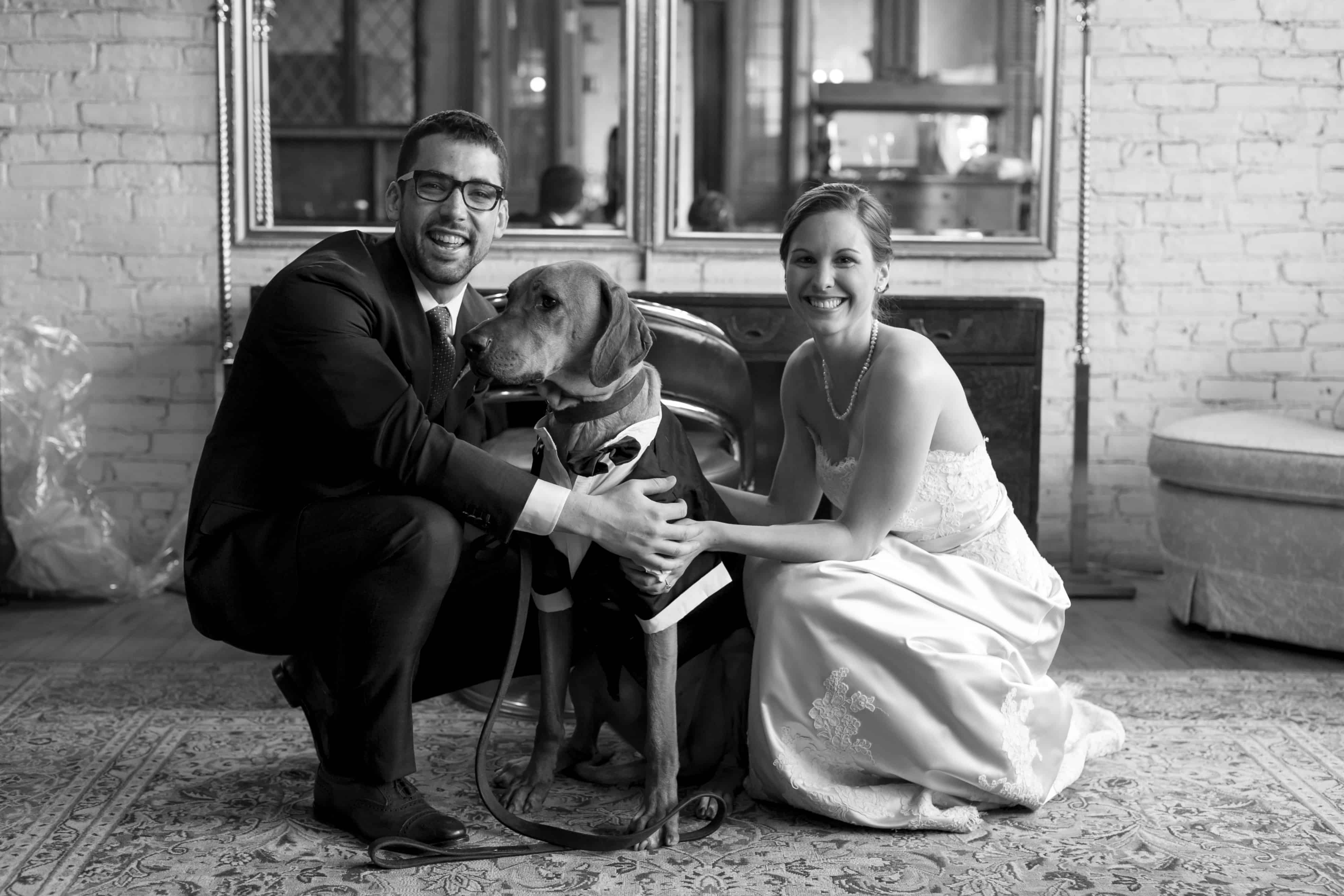 “Our anniversary is coming up.”“Oh, right.“ Emily replied. “April…26th?”“It’s the 24th this year!” I chided with mock outrage, neglecting to mention I peeked at the framed wedding invitation in our kitchen for the answer.I’m certainly in no position to comment on the finer details of matrimony. When it was time to select a wedding band for myself I opted for a $20 tungsten ring from Amazon. I added it to an order of dog treats and forgot about it until the week of our wedding. At which point I realized that in my haste to give Eko and Penny their new snacks I had thrown out my ring with the shipping box.I shelled out another twenty for the replacement and ordered some more dog treats for good measure. Luckily I remembered to take the ring out of the box first on the second time around.This is how it has always been for me. I take care of my dogs’ needs before I take care of my own. It is my daily meditation on how loving service to my dogs is also a loving service to myself.Shortly after we got engaged I told Emily that Eko would not be involved in the wedding. Penny Mayhem, in the throes of her wildest phase, was not even mentioned in the conversation. The idea of setting Penny loose in an industrial warehouse filled with antiques was beyond preposterous.We had joked about Eko’s participation in the past, but I wanted to make sure Emily knew the day belonged to her, not our dog.“Are you kidding? He has to be the ring bearer,” she said. As if the thought of anyone else carrying our rings was as preposterous as loosing Penny in amongst the antiques.Acceptance has always been Emily’s greatest loving service. She accepted me when I was lost. She supported me when I wandered in search of myself. And she embraced the fact that the man she agreed to marry was inexorably bound to his dog. When I was ready to deny a part of who I am on her behalf, Emily refused. “Circle of Life” played over the speakers, the congregation turned, and a tuxedoed Eko strutted down the aisle with our wedding rings. Emily knelt to welcome him into her arms, unmindful of her wedding dress. Eko planted a kiss on Emily’s cheek and she smiled, uncaring of her makeup. A symbolic proclamation to the gathered crowd that she intimately knew the fool she was marrying and she accepted all of him.I thanked Emily for her acceptance in my vows. I told her it was that acceptance which gave me the courage to find the man I had become. It was only fitting I held a ring – a symbol of enduring love and acceptance – carried to me by the dog who guided me to that moment.But you cannot possibly know what those rings mean when you place them on each other’s fingers. You cannot be certain how life will challenge those vows and test that bond in dark moments long after the lights from your wedding have dimmed. When I lost Eko, Emily lost me. I’ve written much about my own loss but not enough about Emily’s. The man she married imploded and what remained was a broken and listless man she had never known. While she suffered through morning sickness she also suffered my inability to be the husband I vowed I would be.Emily should have been my only focus during those precious and painful first months of pregnancy, but I could not move on from my loss. She could have demanded I bury the past and focus on the future. She could have expressed righteous indignation at my inability to give her the full love and care she deserved.Instead she offered acceptance. When I rose in the morning darkness to escape the world with Penny, Emily quietly dressed and joined our pilgrimage to the beach. When I cried, Emily held me. And when I came to her with the insane idea of getting another dog just months before her due date, Emily agreed without hesitation.Emily kept her vows even when I couldn’t fulfill my own. She agreed to marry me knowing I was bound to my dog, so she willingly and graciously suffered the consequences of my unbinding. Emily never tried to fix what was broken. Instead she held the pieces of my heart together until I was ready to sort through them. And she knew when that time came it would require the help of a dog.Which is why last Valentine’s Day, a six-months-pregnant Emily could be found trotting a little Ridgeback show pony around the perimeter of puppy class. Sometimes the greatest acts of love seem nearly as ridiculous as the idea of Penny in an antique store. Our hot date concluded with an order of Chipotle takeout. I saved a small portion of meat for Penny and Zero to share. We smiled and laughed and I felt more like myself than I had in a long time.Long before Emily was pregnant I dreamt of our child nestled against Eko. I wanted so desperately for that child to share the comfort of  my dog’s unconditional love. When Eko died, I believed my dream died with him.It still hurts that Lincoln will never rest his head on Eko, but I was wrong about the demise of my dream. Just because life cannot proceed as planned does not mean it cannot proceed.Recently we returned to the old brick building where we were married. This time, instead of flowers, Emily held Lincoln in her arms. She passed him to me and I carried my son down the makeshift aisle where Eko once carried our wedding rings. I felt a renewed gratitude for the woman who accepted the ring, the dog, and the man.

Lincoln will have his own opportunities to learn the value of unconditional love as long as we are willing to offer them. I often use this blog to offer that opportunity to him through my dogs. But today I’m reminded my offering to my son is only possible because Emily offers that same opportunity to me.It is a debt I can never truly repay, but I’m grateful for each day I have the opportunity to try.So in the spirit of Emily’s unwavering acceptance, I guess I can accept her egregious sin of getting the date of our anniversary wrong. When it counts, she gets everything right. Happy….*frantically checks wedding invitation*… third anniversary to the bravest woman I know!
Previous Post [VIDEO] What Does a Rhodesian Ridgeback Look Like? Back to all posts Next Post [VIDEO] Spring in Chicago?