Dog Friendly Chicago: Where To Snack

Let me start off by saying that if for some reason every dog treat in every pet food store disappeared tomorrow, Eko would still be able to snack like a king for about a year.  We visited four local pet shops today and Eko is now the proud owner of 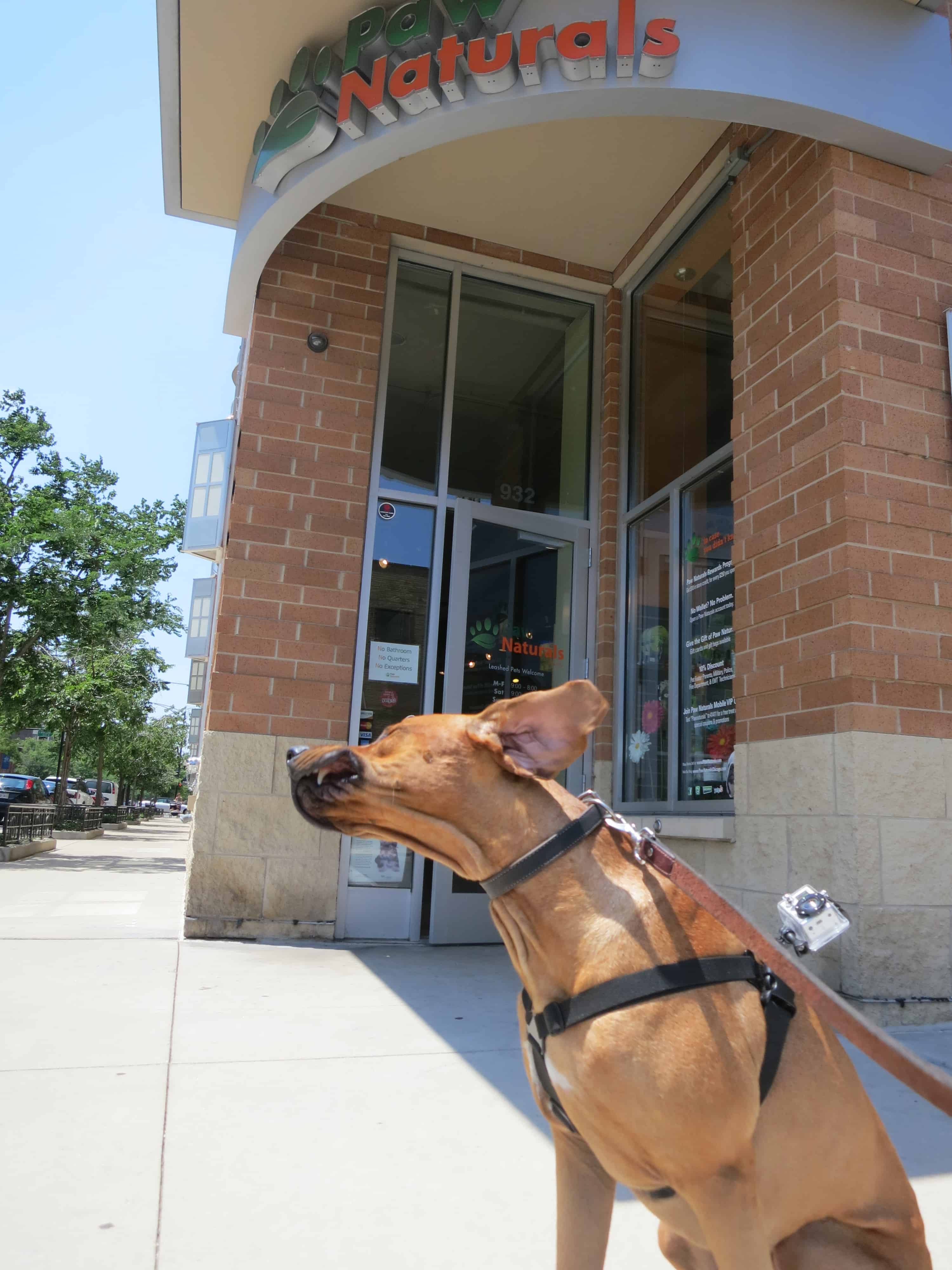 Let me start off by saying that if for some reason every dog treat in every pet food store disappeared tomorrow, Eko would still be able to snack like a king for about a year.  We visited four local pet shops today and Eko is now the proud owner of a serious treat stockpile.  Treatpocolypse, we’re ready for ya!And let me also say that I learned an important lesson yesterday: it is a bad idea to put a dog bed near any important wires.  As Eko settled down for a nap he pulled out half the wiring in Chicago from my wall.  The internet was out until late last night, but I managed to put everything back in place so we are good to go.We’re in the middle of a heat wave in Chicago and yesterday was both hot and blustery.  Luckily our intrepid videographer was willing to stand toe to toe with the wind at our first stop – Paw Naturals. Marking Our Territory’s newest cameradog valiantly battled the weather to get the inside scoop. It wasn’t pretty, but he got the job done!

Paw Naturals is a full-service pet store with a carefully selected sampling of food, treats, toys and gear.  Paw Naturals also has a great location, it’s across the street from a dog park.  I snagged some jerky for Eko and we stopped by the park for a quick romp.And just when I thought we’d seen it all, the dog park actually had an automatic water fountain that went off every few minutes to flush out stagnant/dirty water.  Eko was a bit confused at first and guiltily looked at me like he had broke the water bowl, but he got the hang of it before we left. Our stop at the park was quick, but the oppressive heat had Eko panting as we walked into  Your Best Friend Pet Supply. Eko loves any treat, but Josh (the owner) had the absolute perfect treat to beat the heat.  Your Best Friend mixes up its own doggy ice cream and Eko was in heaven when I bought one for him.

Next up on our tour was The Active Pet.  Eko was still licking ice cream off his lips as we pulled up and I thought about how nice it would be to have some frozen treats stocked up for hot Chicago summer days.  The Active Pet took care of that concern because it had Eko’s favorite treat in stock – Frosty Paws!  Just seeing the box brought me back to the great time we had in San Diego. Last, but certainly not least, we stopped by 4 Legs pet shop.  I was up to my elbows in treats and thought that we couldn’t possibly find anything different to try.  There were a couple of treats which caught my eye that I just had to get.  For America. From frozen to freeze dried, we picked up just about every type of treat out there.  Even better was that we got to meet some great people and store owners along the way.  Eko is normally a pretty memorable character but I have a feeling that no one is going to forget about the pup with the camera on his back.

New treats, new friends and we didn’t burn the apartment down.  That’s pretty much my definition of a successful day!  It’s another scorcher today in Chicago, so we’re going to visit a local indoor park and cool off.

If you have any favorite strategies to beat the heat with your pet shoot me an email at willandeko@gmail.com

Previous Post What Is Eko Thinking? Back to all posts Next Post Photos From The Road (Part 1)

Comments for Dog Friendly Chicago: Where To Snack