Now, it was not my intention to tell a lie to a bride on her wedding night, but it wasn’t entirely my fault.  Just hear me out. When you book a hotel room online there is usually a little box where you can submit any additional information/requests.  For

Now, it was not my intention to tell a lie to a bride on her wedding night, but it wasn’t entirely my fault.  Just hear me out.

When you book a hotel room online there is usually a little box where you can submit any additional information/requests.  For the most part, I leave that box blank.  But for some reason when I booked our room at the Vintage Plaza in Portland I decided to write “Eko is trained to hunt lions, so please make sure no lions are staying at the hotel.”  As soon as I booked the room I completely forgot about what I wrote.

When I checked into the hotel the front-desk employee looked at Eko with wide eyes and said, “Oh, is that the dog that hunts lions?”  I thought she knew about the history of the Rhodesian Ridgeback breed, so I just smiled and jokingly said, “Yeah, that’s him, but he’s still young so he’s only caught a few so far.”  I assumed that her jaw-drop was just her way of being in on the joke.

As it turned out, she actually believed me, and soon the entire hotel staff was asking me about the “lion-hunter.” I was totally oblivious and assumed everyone was joking. I didn’t realize the truth until a very inopportune time.  The Vintage Plaza hosts a complimentary wine reception every evening where dogs are welcome.  On Sunday night a bride and her bridal party happened to be in the lobby taking photos at the same time as the wine reception. Eko and I were debating the finer points of Italian vs Chilean wine when one of the hotel employees said,”Oh look, it’s the dog that hunts lions!”  Something in her voice made me realize that she wasn’t kidding.  The bride then turned to me and said, “Your dog hunts lions? That’s amazing! How does he do it!?”

I would like to say that I fessed up and told the truth, but that was not the case.  I didn’t want to be the guy who ruined the party!  So instead I was the guy who lied to the bride.  I said something very articulate like, “Well, he…ummm…chases them!?” and then quickly ran away.  Eventually I straightened out the truth with the hotel employees but I just wanted to say sorry about the mix-up bride lady, hope you had a good wedding!

Ok. My conscience is clear. Now I can tell you about why the Vintage Plaza rocks.  Exhibit A: 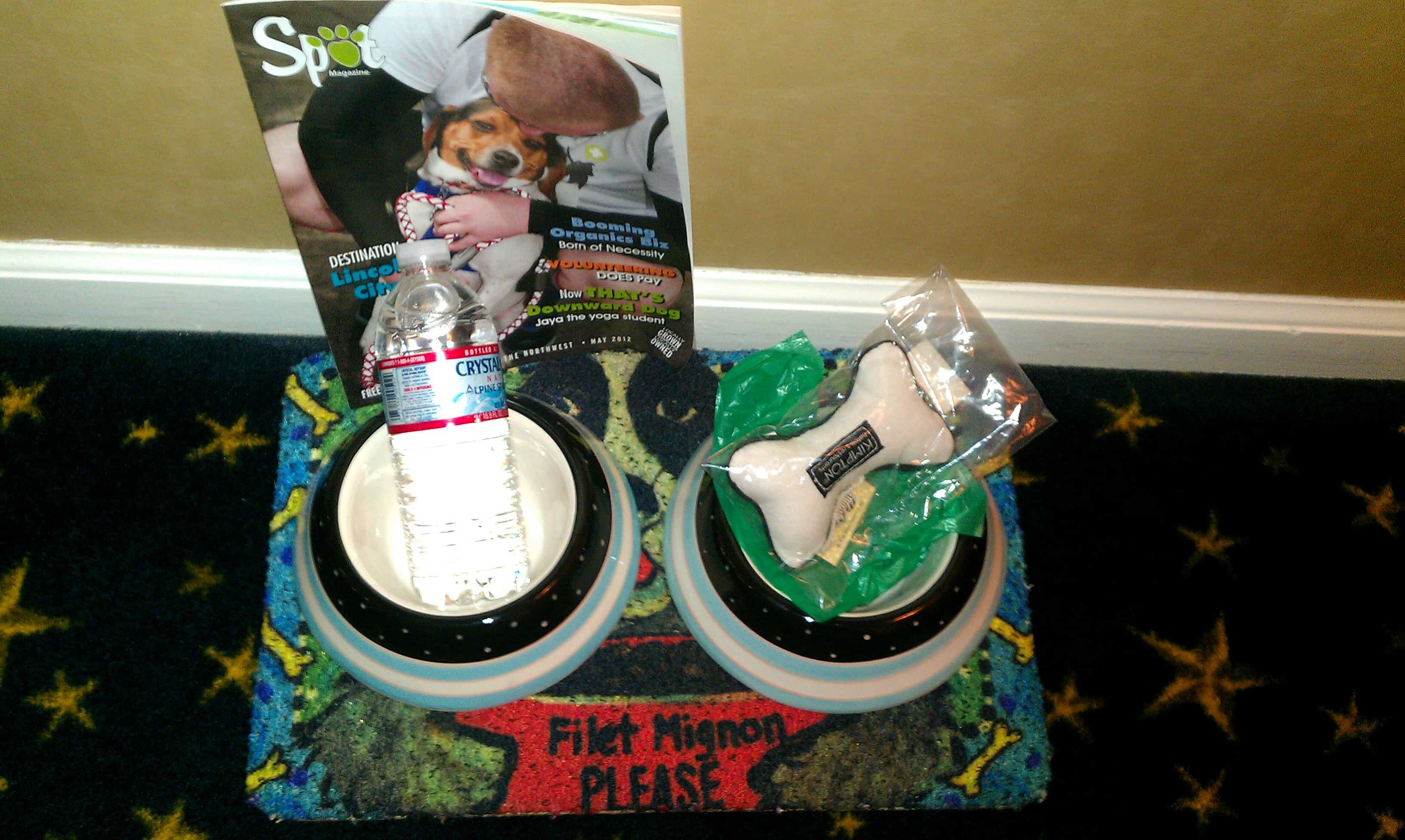 I have seen contestants on Wheel of Fortune win prize packages about half the size of what the Vintage Plaza laid out for Eko in the room.  A mat, bowls, treats, water, bags and a list of some nearby pet-friendly destinations – the Vintage Plaza really knows how to hook a dog up! 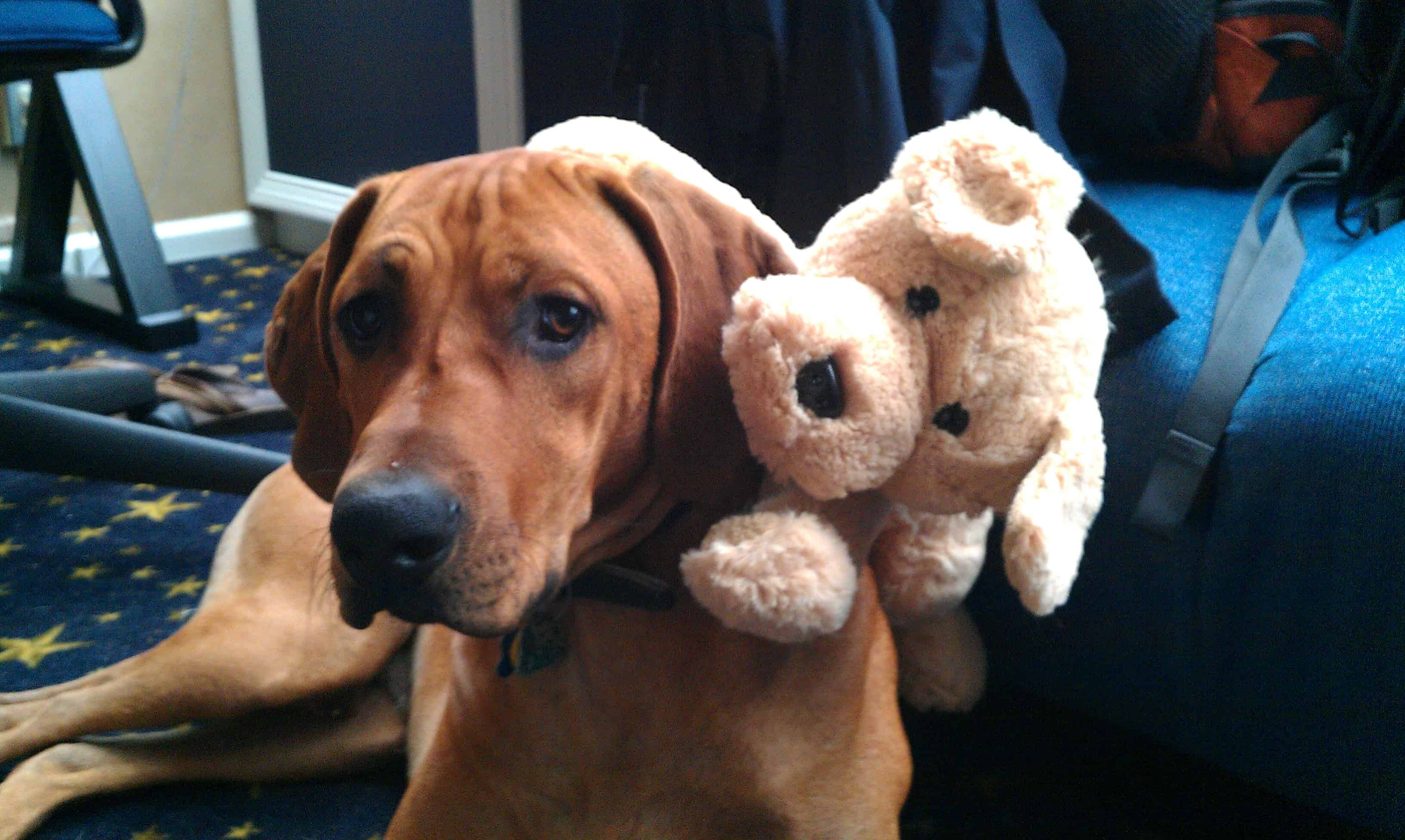 As if that wasn’t enough, the hotel also gave Eko a plush toy to play with. And come on, does that look like the face of a lion hunter? 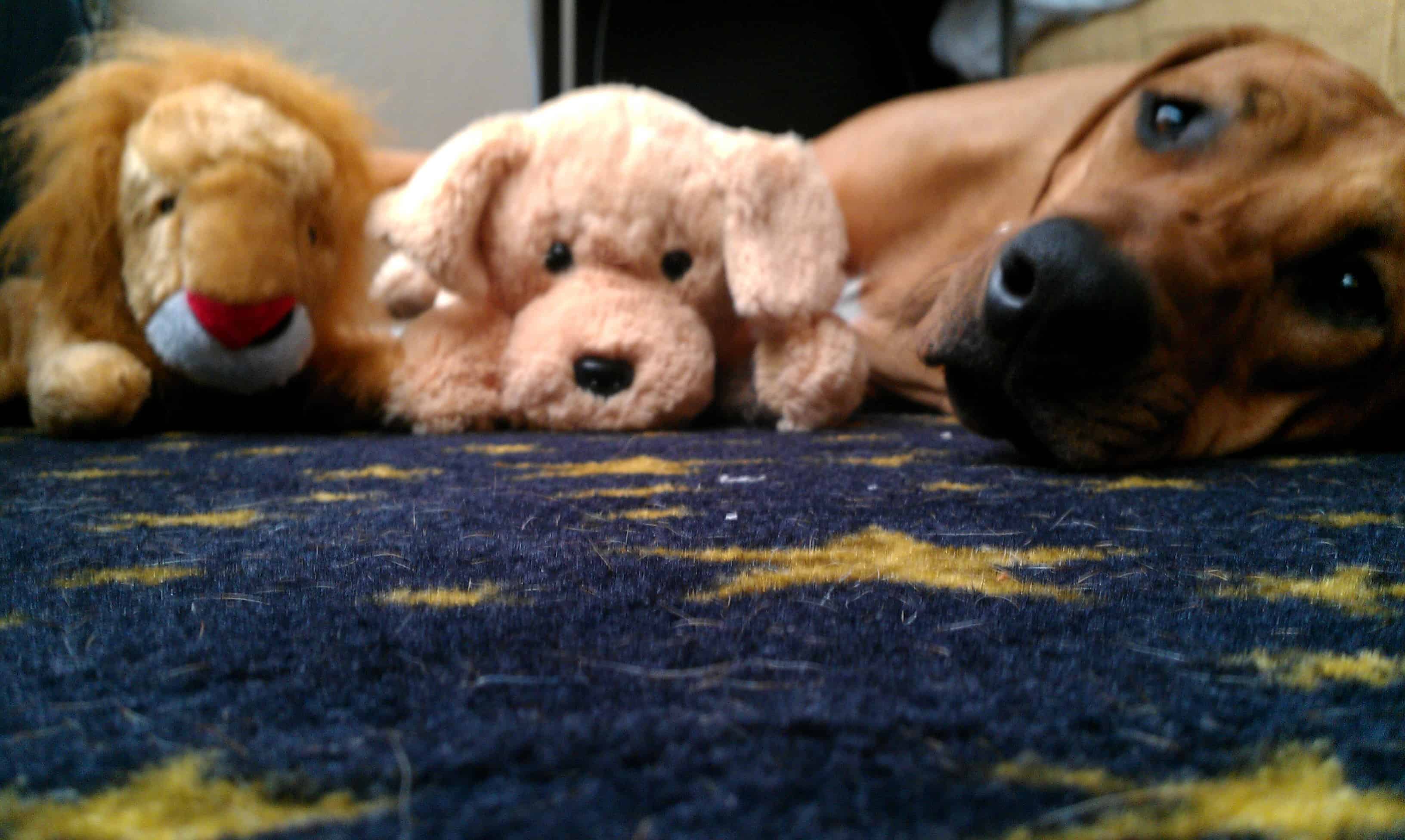 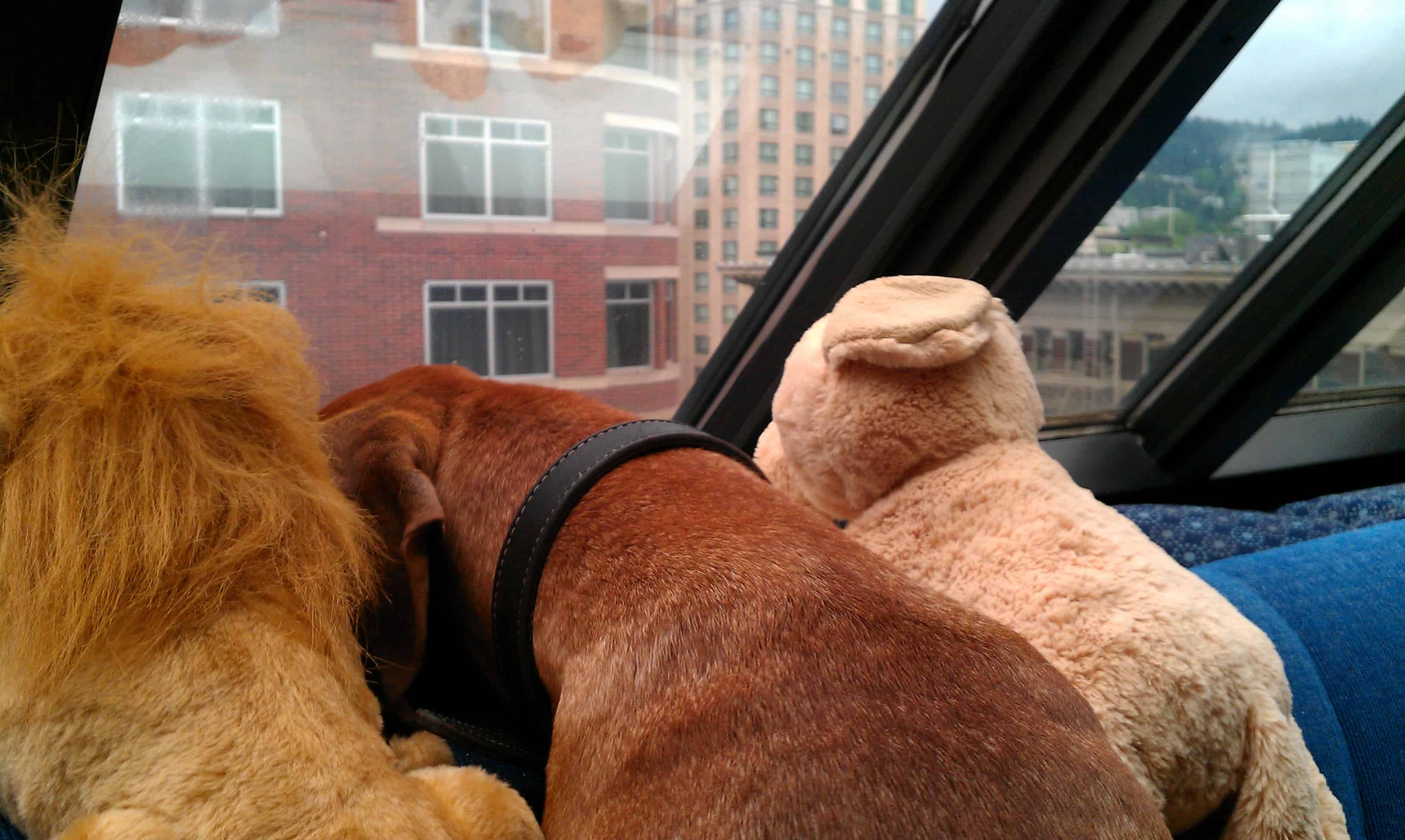 Eko and his friends waited out the rain together

The Vintage Plaza also happens to have a canine employee (I’m not sure how the tax situation works) named Georgie who hangs out during the wine hour. 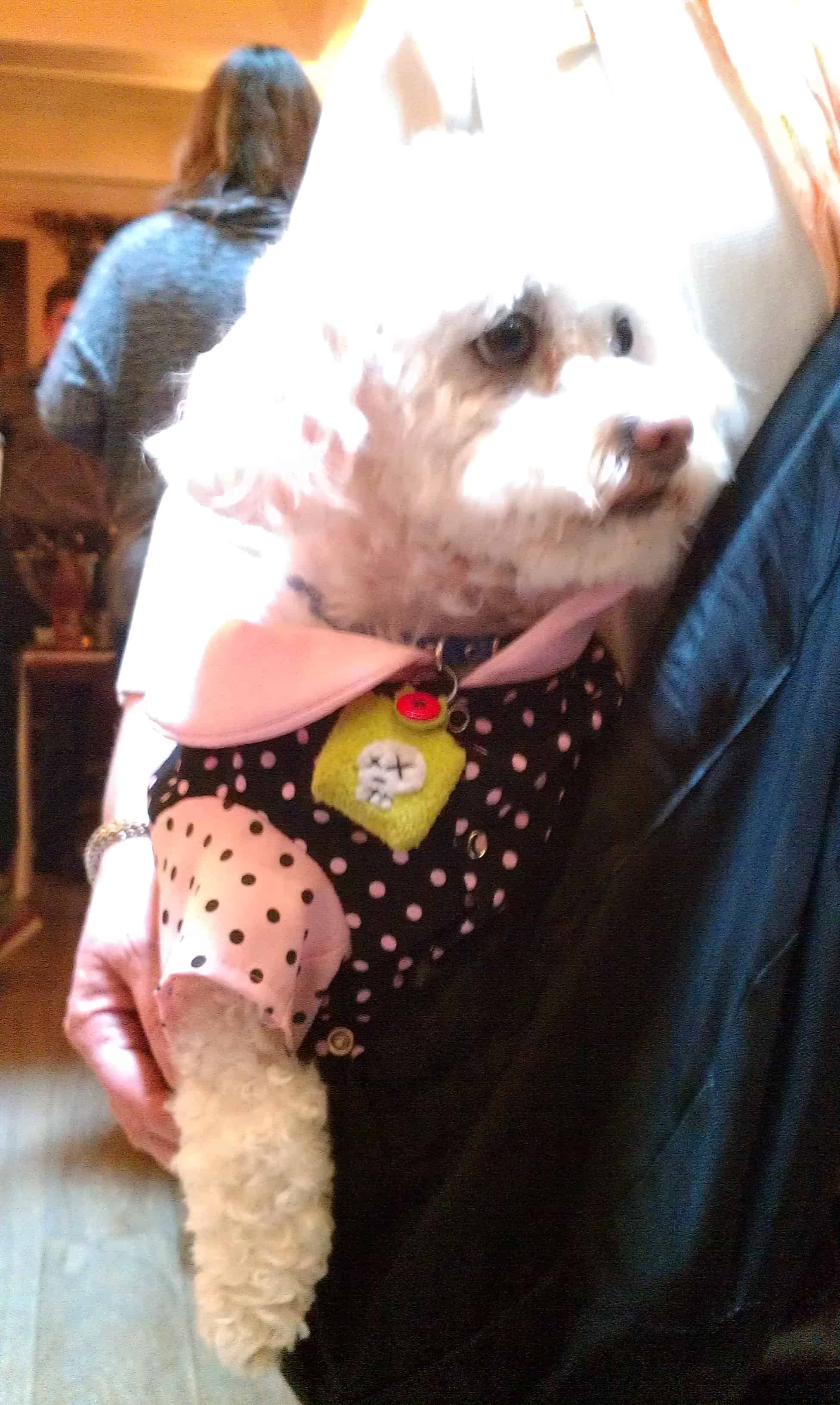 Georgie hangs out with the guests, and when she’s tired, she literally hangs out of a bag.  Eko wanted me to get one for him, but my doctor said that’s probably not a good idea 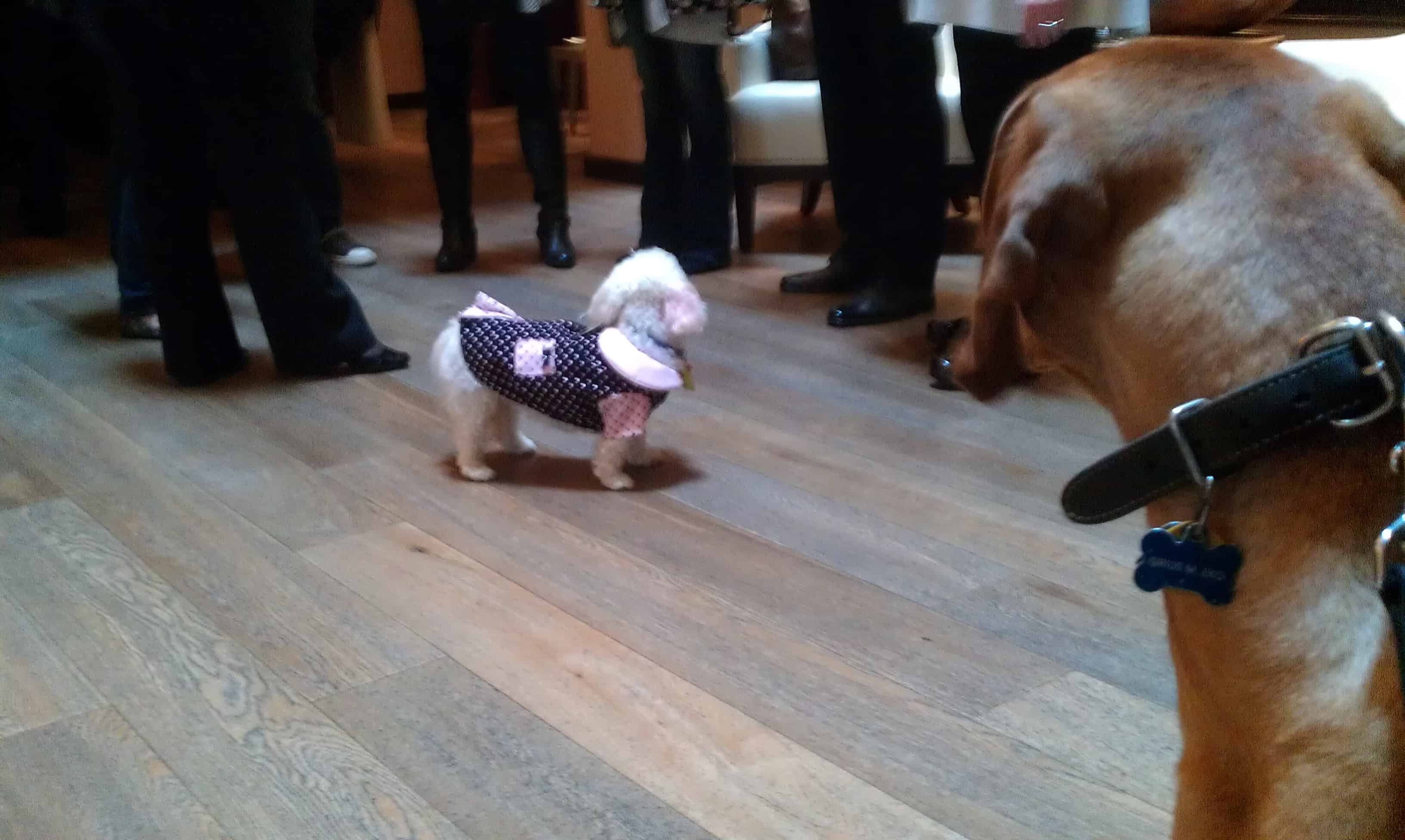 Eko was infatuated with Georgie, but she is an upscale Portland socialite and he is a vagabond traveler – it could never work out between them 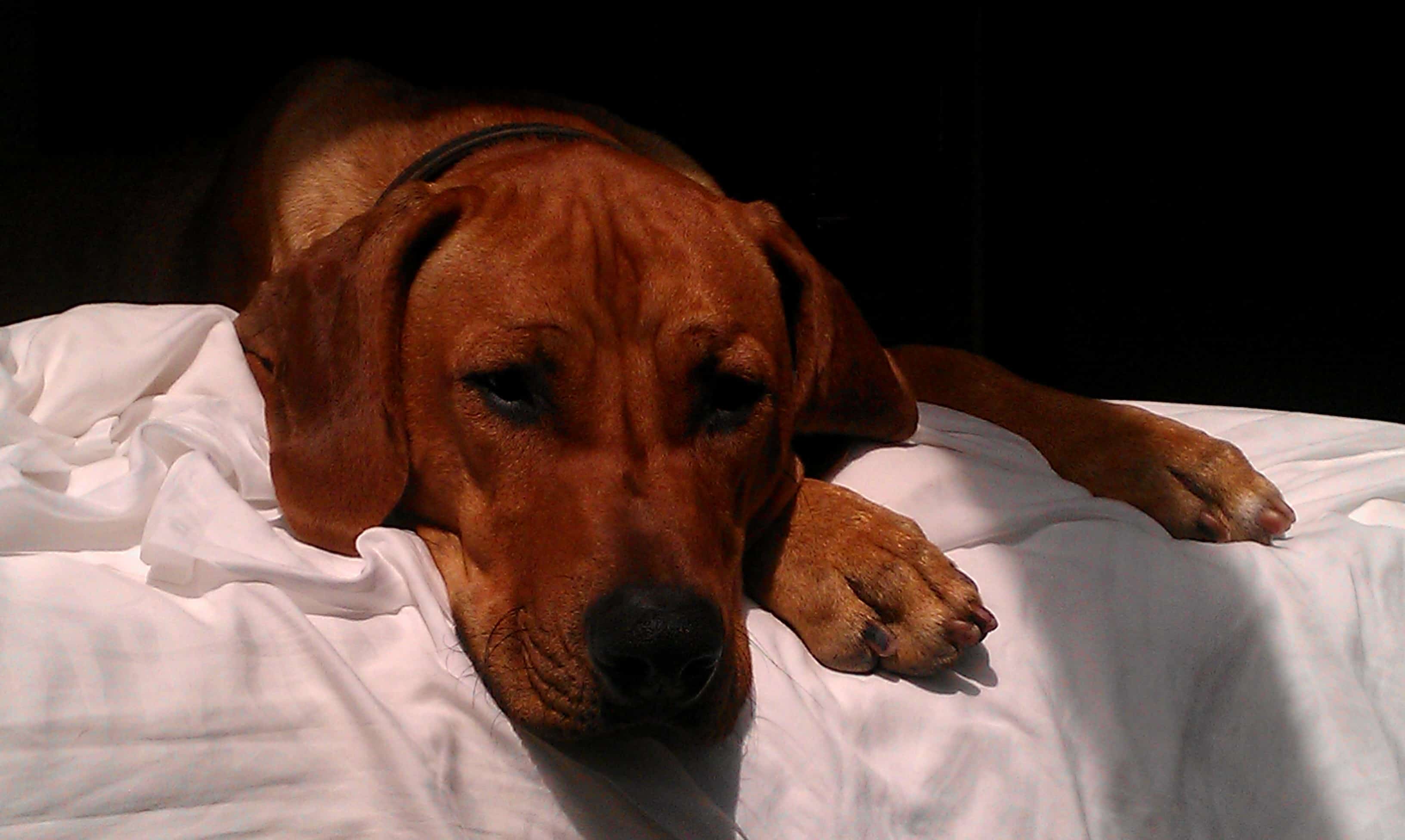 “Will, do you think Georgie will remember me when we’re gone?”

The Vintage Plaza knows how to show a dog (and a human) a really good time.  You and your dog will always feel welcome and right at home.  I can’t recommend the hotel highly enough.

Portland, it was wet but it was a whole lot of fun!  We’re making our way to Seattle today for the last stop on our tour of the left coast.  If you look at the itinerary you can see that Seattle is the last marked stop on the list, but there are big plans in the works.  Be sure to check back next week to see what’s in store.

Hope everyone has a great Memorial Day Weekend, grill a burger for me and give your pet a treat for Eko!  And if anyone knows Bill Gates let him know that Eko and I will be on his home turf for the next week and want to meet up.