Five Rules for the Dog Guild of Thieves

Eko and Penny, like most dogs, are unabashed thieves and live by Aladdin’s code; “I steal only what I can’t afford…that’s everything!” But I’ve discovered there is honor amongst thieves. The pups have an established set of rules governing their pickpocket ways. Rule #1: Absolutely no stealing from a fellow

Eko and Penny, like most dogs, are unabashed thieves and live by Aladdin’s code; “I steal only what I can’t afford…that’s everything!” But I’ve discovered there is honor amongst thieves. The pups have an established set of rules governing their pickpocket ways. Rule #1: Absolutely no stealing from a fellow thief’s food bowl. 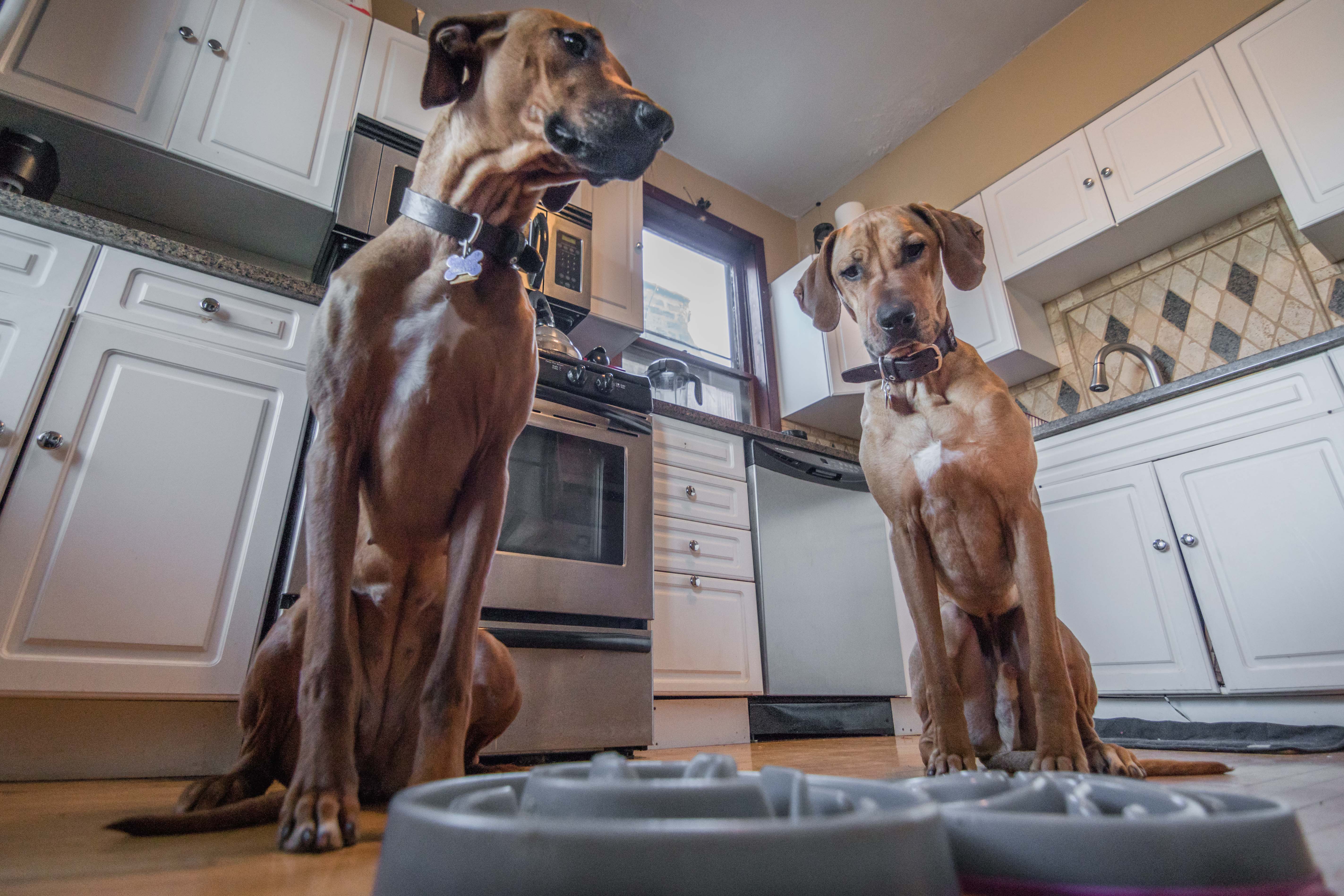 This law is sacrosanct. Puppy Penny tried to steal from Eko’s bowl her first week home but Eko quickly put a stop to that. 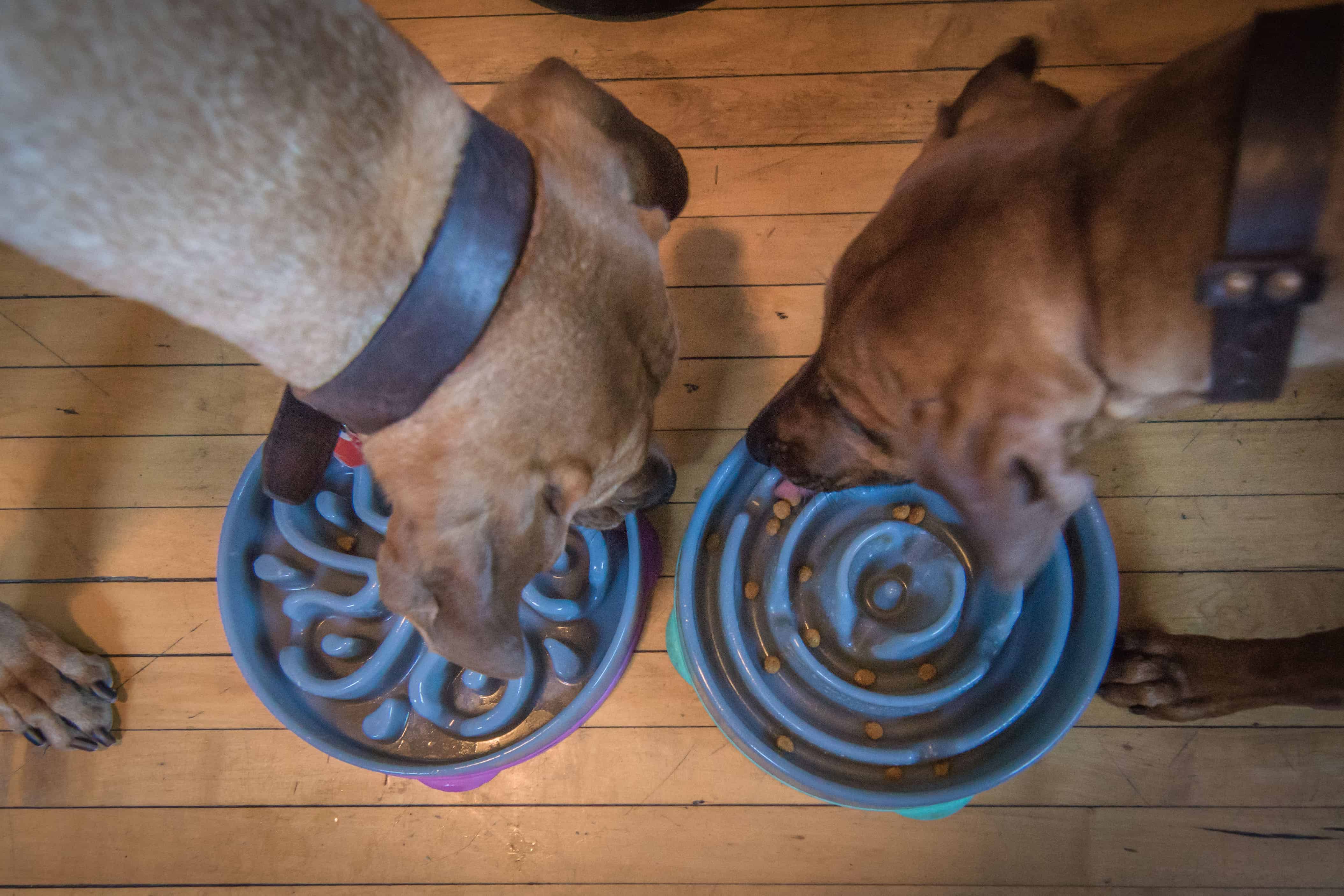 The pups have no problem eating nose to nose, and neither even considers going after the other’s bowl. Any kibble gets knocked out? Well, that’s fair game for a thief

Rule #2: An outright mugging or use of force to steal belongings is strictly prohibited. When it comes to toys an antlers, guile is the name of the game. 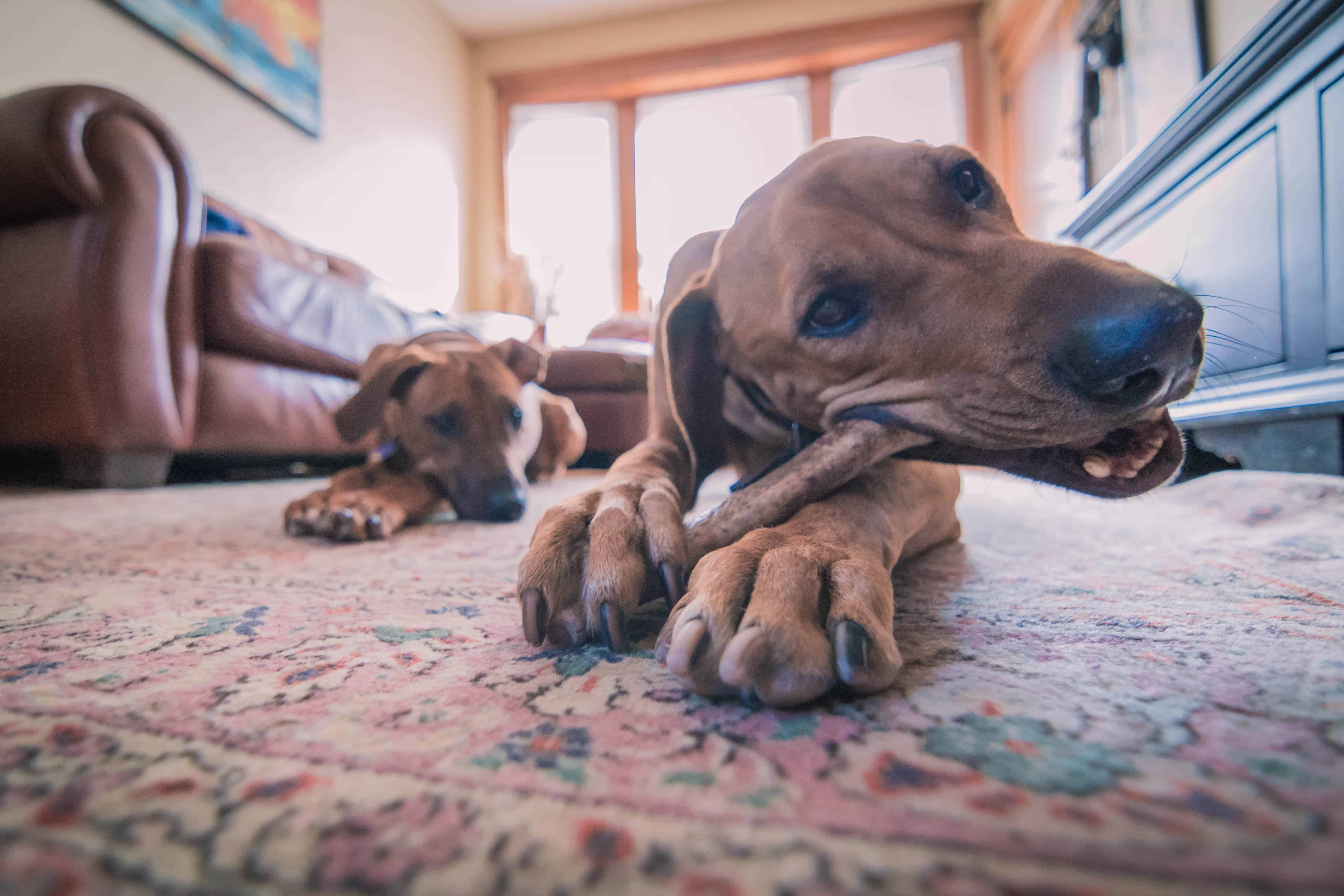 If Penny wants Eko’s antler, she waits for an opening 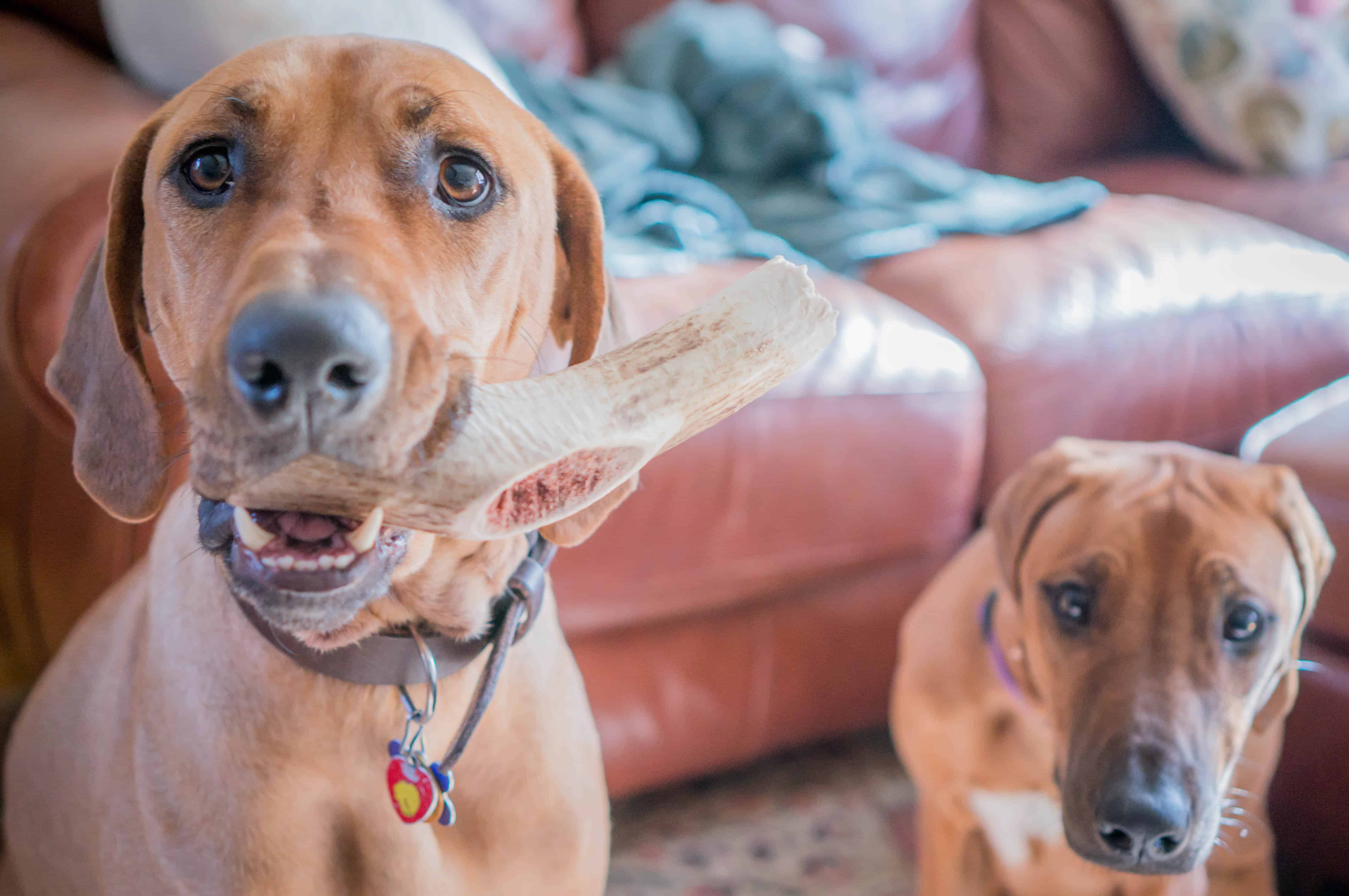 If no opening appears, whining and crying and moaning like an Oscar nominated actor are all fair game 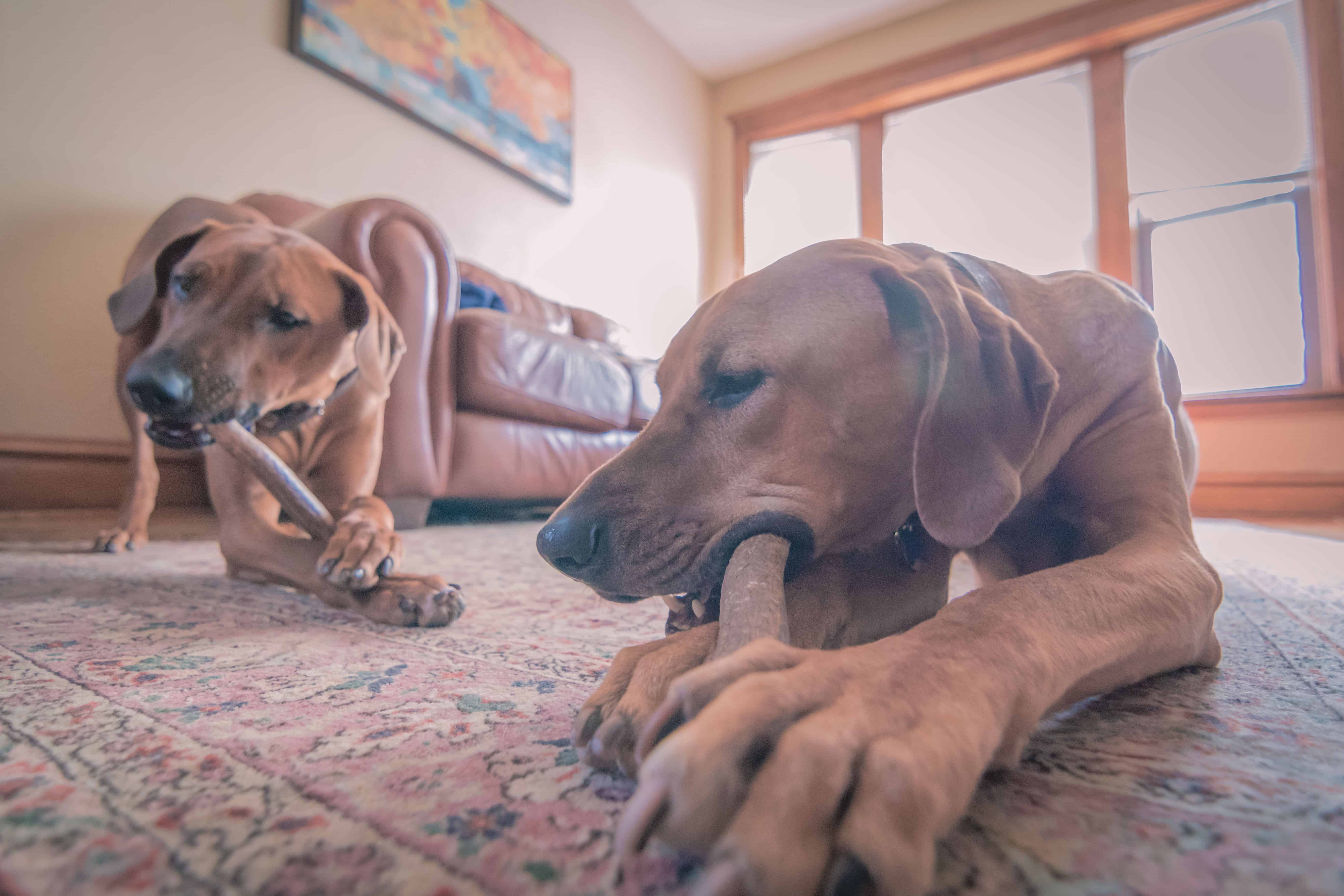 The little thief’s tactics don’t always work on Eko, but she certainly knew how to steal another antler out of my wallet. 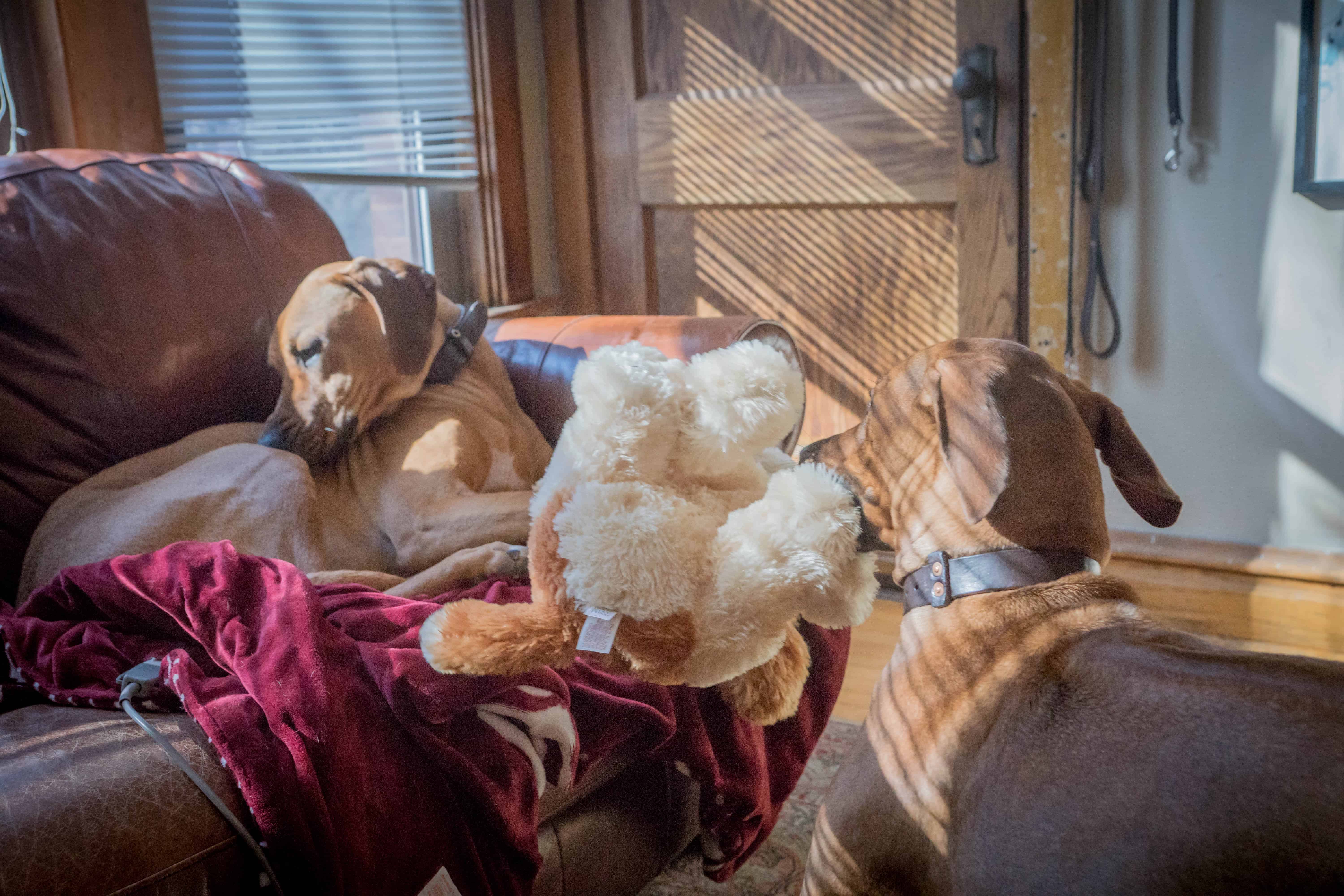 There’s not two of everything, so a thief must be ready to strike. There’s no stealing a toy while someone is playing with it, but if they happen to look away for a moment? Fair game

Rule #3: Adhere to the Treats Treaty. The treaty states that no dog should jostle or jockey to keep the other from eating well-earned treats. As a puppy, Penny relentless tried to eat every single treat, even those meant for Eko. But she quickly figured out she got more treats for less work if she sat politely. 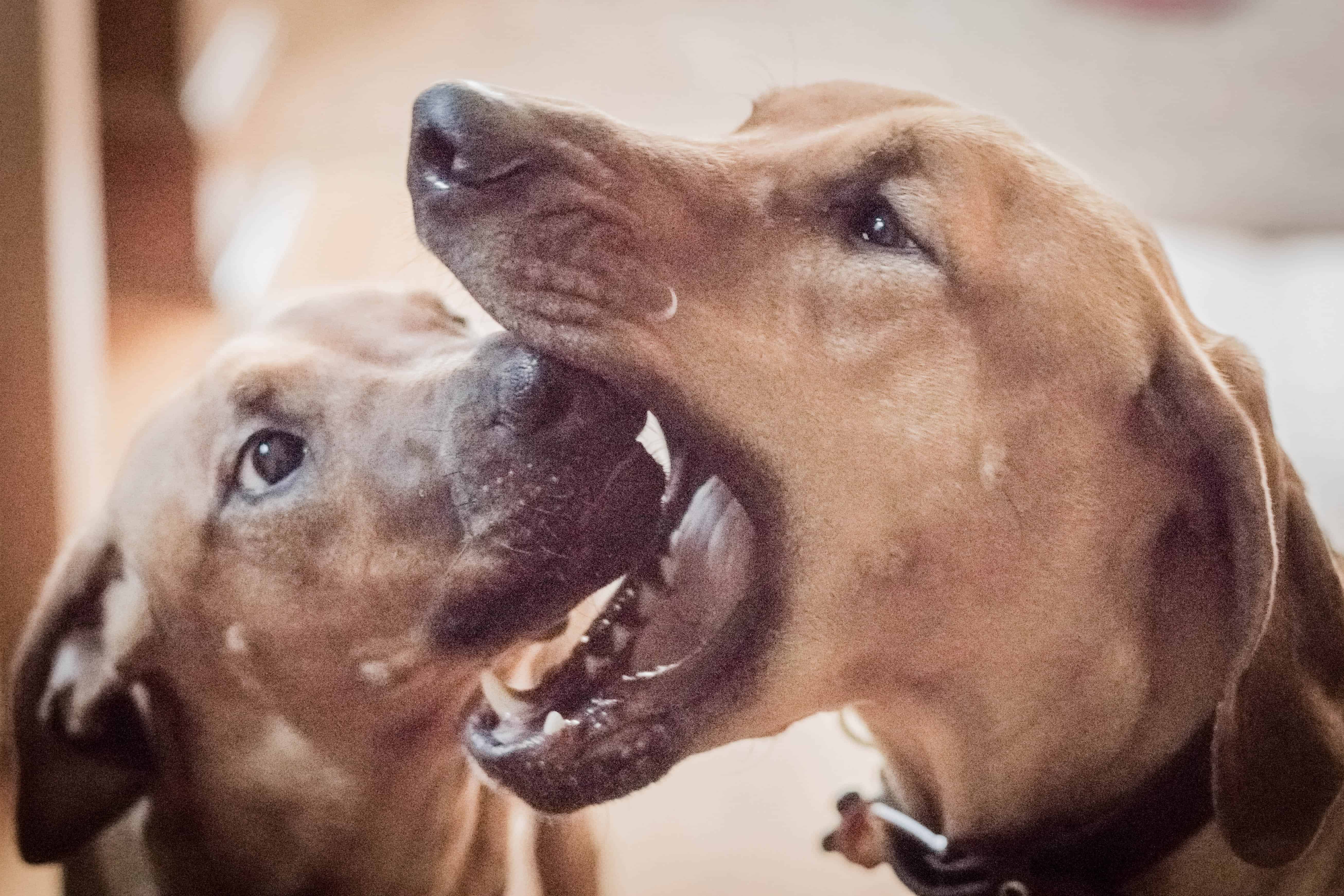 You can only stretch a thief’s honor so far. After Eko’s gotten the treats there is no rule about trying to steal them from his mouth

Rule #4: When it comes to stealing the best seat on the couch, there are no rules. Whatever it takes, these thieves have no qualms about using brute force and trickeration to sit on the comfiest throne.

Wily Eko prefers to use his veteran wits. If Penny has the best seat, Eko will often prance into another room with a regular-old-toy, pretending it’s some kind of great prize. Penny can resist everything except temptation so she’ll dart off the couch to investigate. At which point Eko drops the toy and claims the vacant, but pre-warmed seat. Victory!

At least until Penny decides to use more direct tactics… 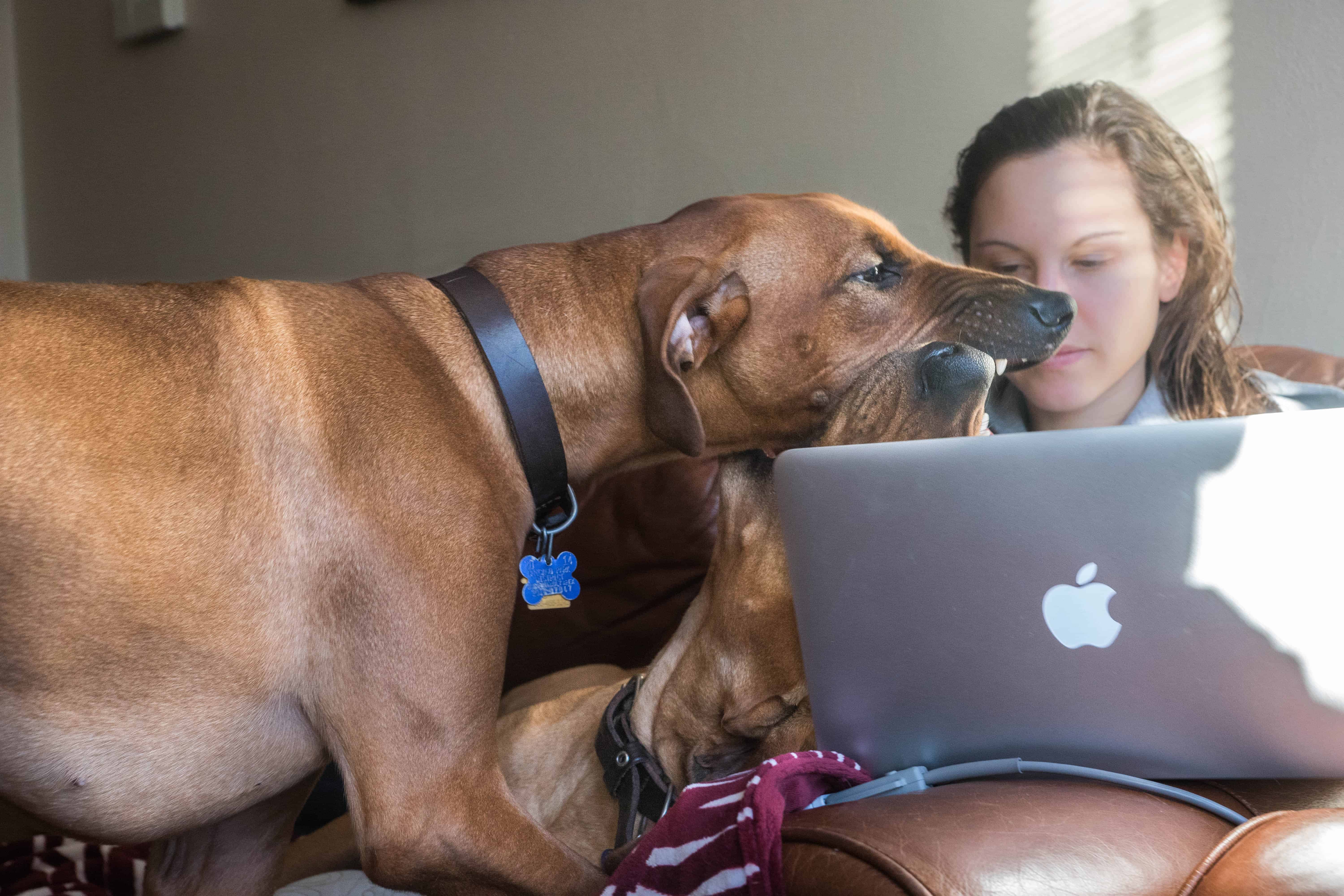 She’s not the most subtle thief in the guild, but her methods are effective 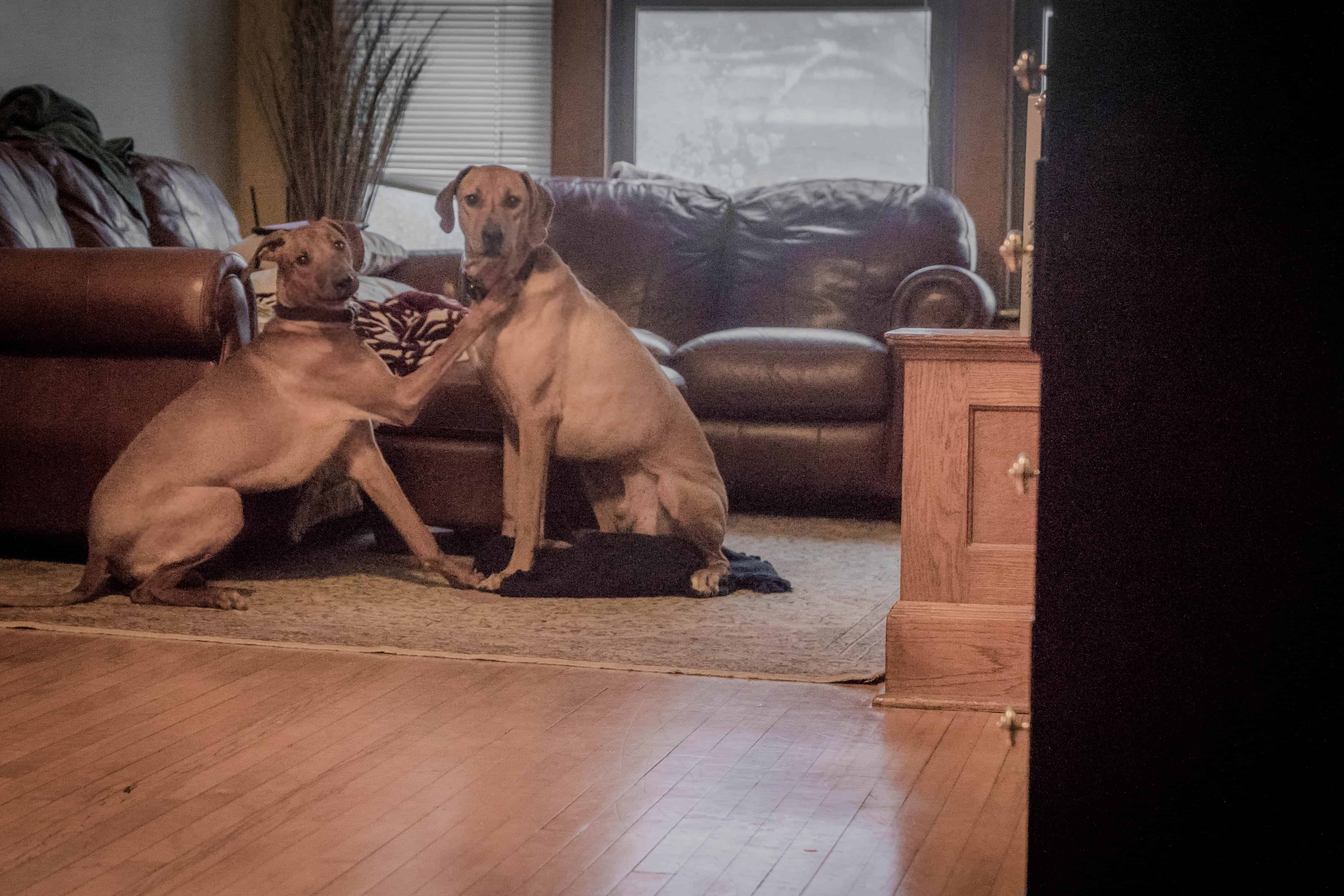 No matter what differences there are between thieves, they’ll always play innocent. Even when caught in the act 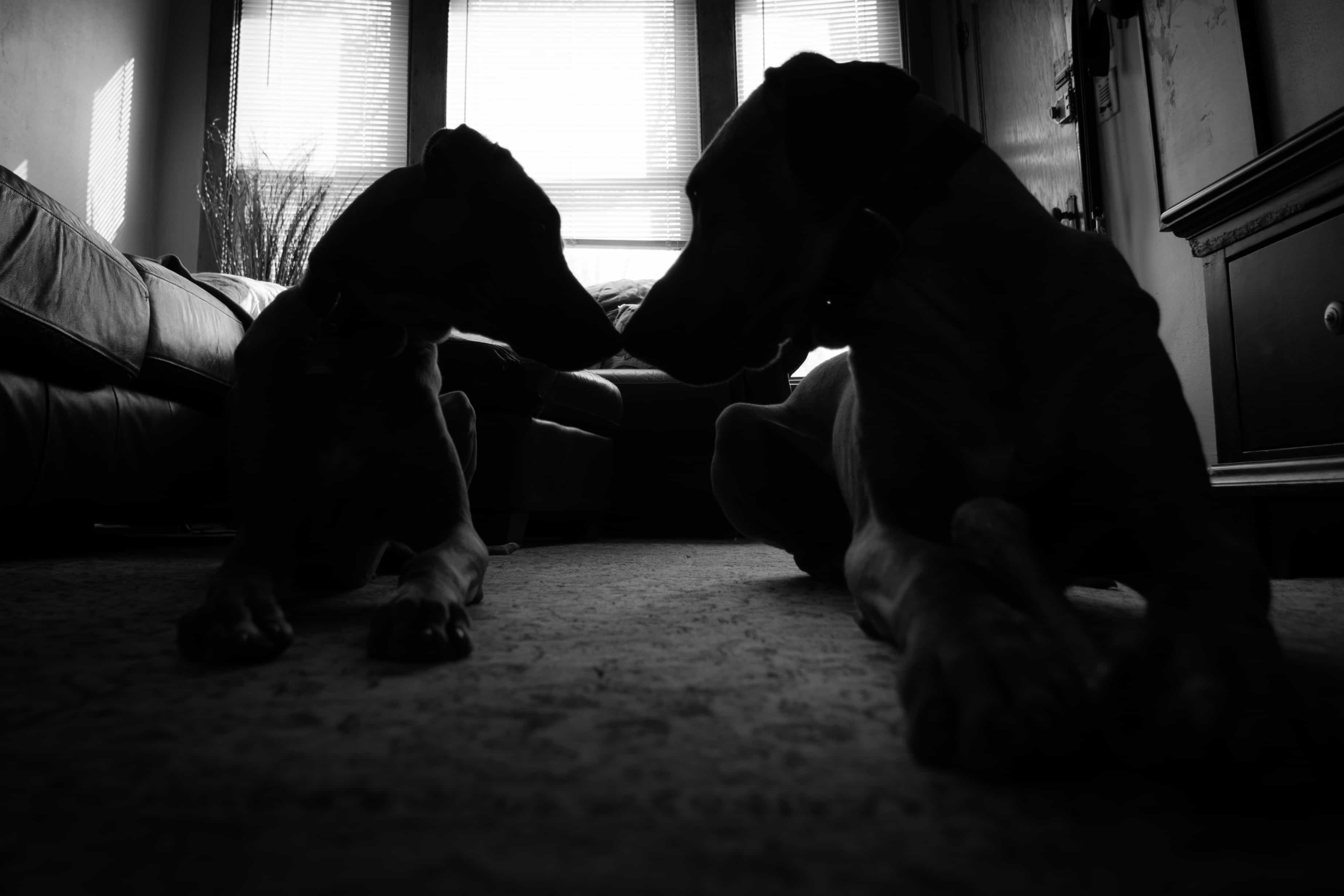 Operating in the shadows, and in the kitchen…and pretty much everywhere, they are the Dog Guild of Thieves

Of course, Eko and Penny are only one chapter of the global guild of thieves and they live by their own code.  What about your thieves? Do they follow the same codes as my two or do they have rules all their own?

Comments for Five Rules for the Dog Guild of Thieves