Earlier this week I wrote about my plan to teach Eko how to catch flying discs with the help of the Pro Plan P5 app.  Yesterday it was time to get down to work.  The first line of instruction from the P5 app reads, “The sport of flying disc 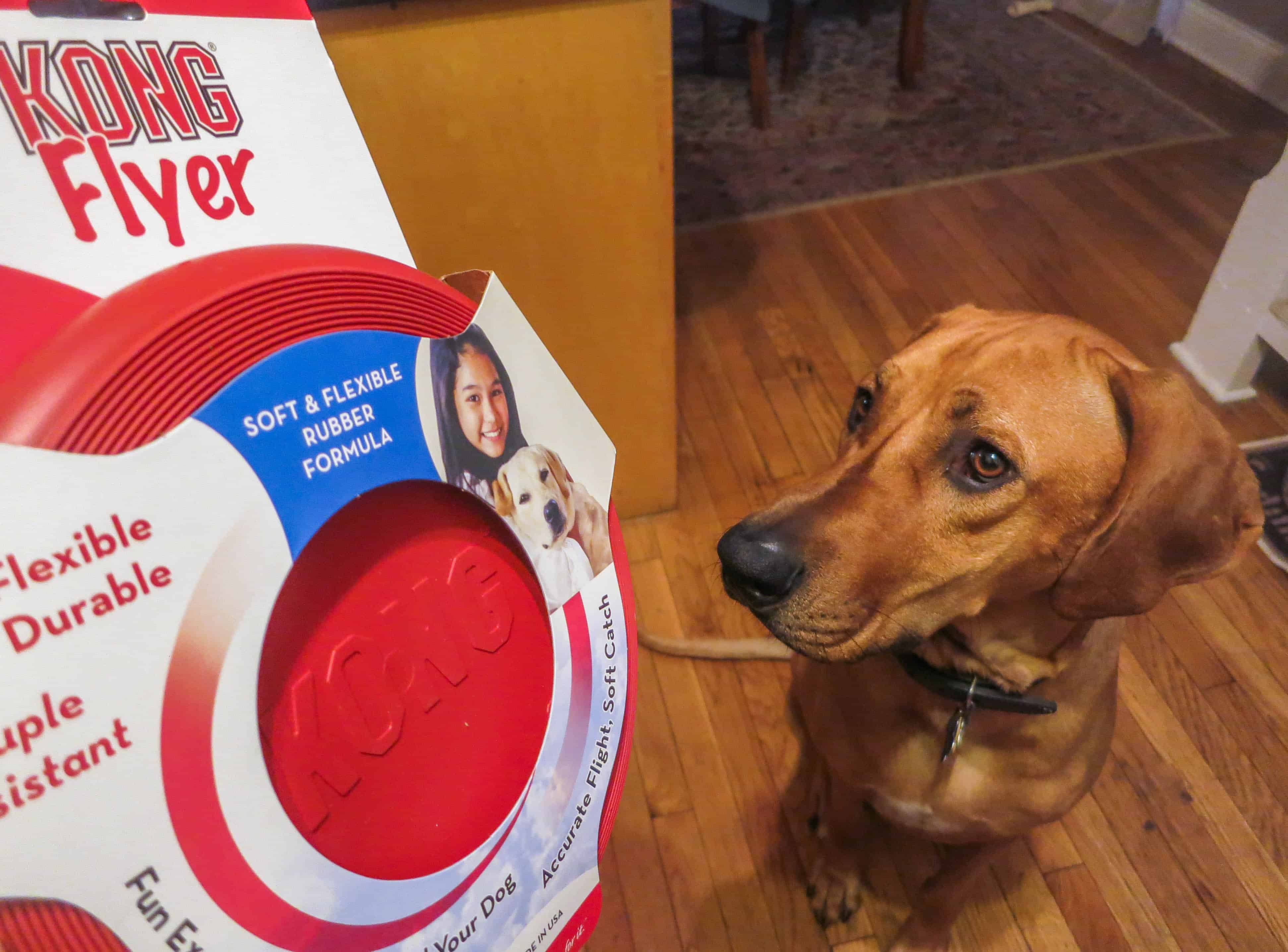 Earlier this week I wrote about my plan to teach Eko how to catch flying discs with the help of the Pro Plan P5 app.  Yesterday it was time to get down to work.  The first line of instruction from the P5 app reads, “The sport of flying disc is ideal for highly active, extremely motivated, toy-driven dogs.”  As the philosopher Meatloaf once sang, “Two out of three ain’t bad.”  Eko was, is and forever will be a food motivated dog, but we shall not be deterred! Our first order of business was to pick up a disc. Although reviews said that the Kong Flyer doesn’t fly as true as some others, I picked it up because I knew it would be durable.  We have a lot of practice to do before we are throwing for distance and we can’t practice if Eko eats the disc!

Whenever I open a package with Eko nearby his face always asks the same question – “Can I eat this?”  In the case of the Kong Flyer, the answer was a resounding, “sort of.”  Unlike the regular toys Eko plays with at will, the Flyer is a special toy with a specific purpose.  Every time I bring it out I want Eko to be excited and to know that purpose.  To help reinforce that purpose I acted very excited and gave Eko a treat every time he engaged the toy. Like the app recommended, I started off with some tug of war Normally I don’t like to get Eko riled up indoors, but I wanted to reinforce his excitement about going after the disc Not surprisingly, Eko got a bit too enthusiastic – hence why I got the Kong.  It will be important for me to distinguish the flyer as a “play” toy not a chew toy

For dogs who are not toy-oriented, the P5 app recommended feeding your pup out of the disc to further establish a positive relationship.  It sounds like a move Mr. Miyagi would pull in The Karate Kid, but I need all the help I can get so I tried it. But Eko doesn’t really care where dinner is served as long as it’s served on time!

Day one of training went really well.  I followed all the introductory steps the P5 app recommended and we seemed well on our way to the flying disc big leagues.  I was feeling mighty good and decided to skip a few steps and finish the night with one trial throw.  It did not go as planned…

“Hey Will, you dropped your disc.  What do you want me to do about it?”

Ok, maybe I pushed things just a bit too far.  Eko still has zero inclination to jump for the toss, but I did manage to get him excited about playing with the disc in general.  From here on out we will be practicing outside where hopefully we can really get things cooking!