My Pet Parent Mistakes? How Much Time Do You Have?

Eko’s birthday is next week and it has me thinking about our past three years together.  Of course I remember all the joys and adventures, but I also am reminded of all of the ridiculous mistakes and dumb things I’ve done as a pet-parent. The nice part about

Eko’s birthday is next week and it has me thinking about our past three years together.  Of course I remember all the joys and adventures, but I also am reminded of all of the ridiculous mistakes and dumb things I’ve done as a pet-parent.

The nice part about this blog is that I get to post the fun highlights of my life with Eko, but I think it’s only fair to shame myself for some lapses in judgment. 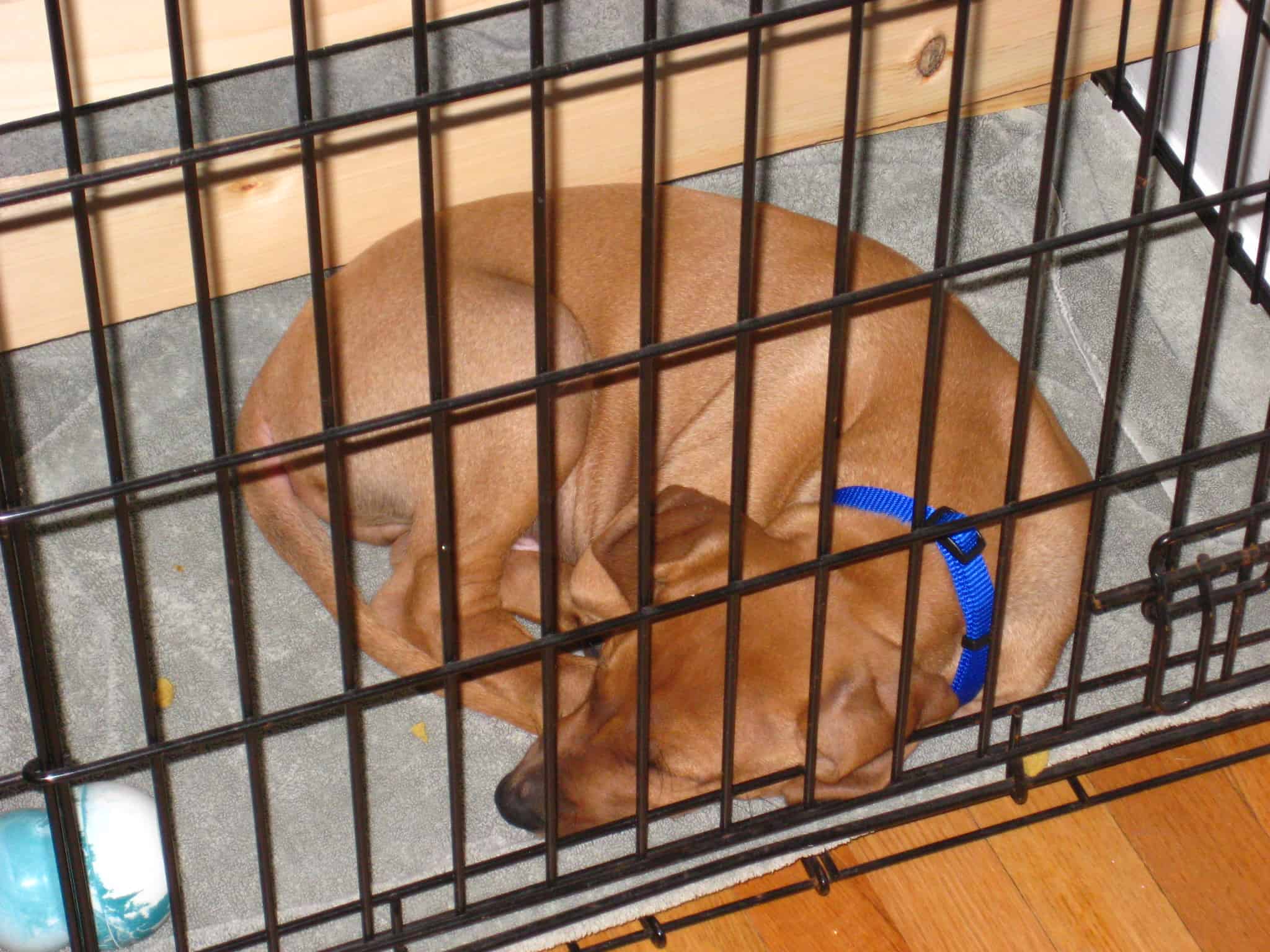 1. Underestimating the escape artist  mistakes(Part 1) – While crate training Eko I misplaced the divider for his crate while moving it between houses.  I planned to pick up the divider the next day, but in the interim decided to use 2X4s to segment the crate.  I was pretty pleased with myself.

Until the middle of the night when Eko knocked two of the dividers away and then managed to get his butt stuck between the other two and I awoke to his yelps. I immediately saw how dumb my plan had been, I just wish I had seen it beforehand!

2. Underestimating the escape artist mistakes (Part 2) – From the beginning, Eko always came everywhere with me.  In the above photo I practiced getting him comfortable in the backseat of my stationary car.  Again, I thought I was a training genius. Eko quickly relieved me of that delusion.

One day, I parked my car in the bank parking lot, unhooked Eko’s seat belt and headed to the ATM outside of the bank.  My car was in my view the whole time.  However, between the time I opened my door and turned the car off, Eko put his paw and rolled down the back window all the way.  I was terrified when from the ATM I saw Eko hop out my back window.  Luckily the parking lot was mostly empty and a young woman quickly picked him up as I sprinted over.  This was the scariest moment of Eko’s puppyhood, he easily could have gotten hurt.  I’m very lucky Eko was unhurt and from that point on I was always doubly conscious of his safety. 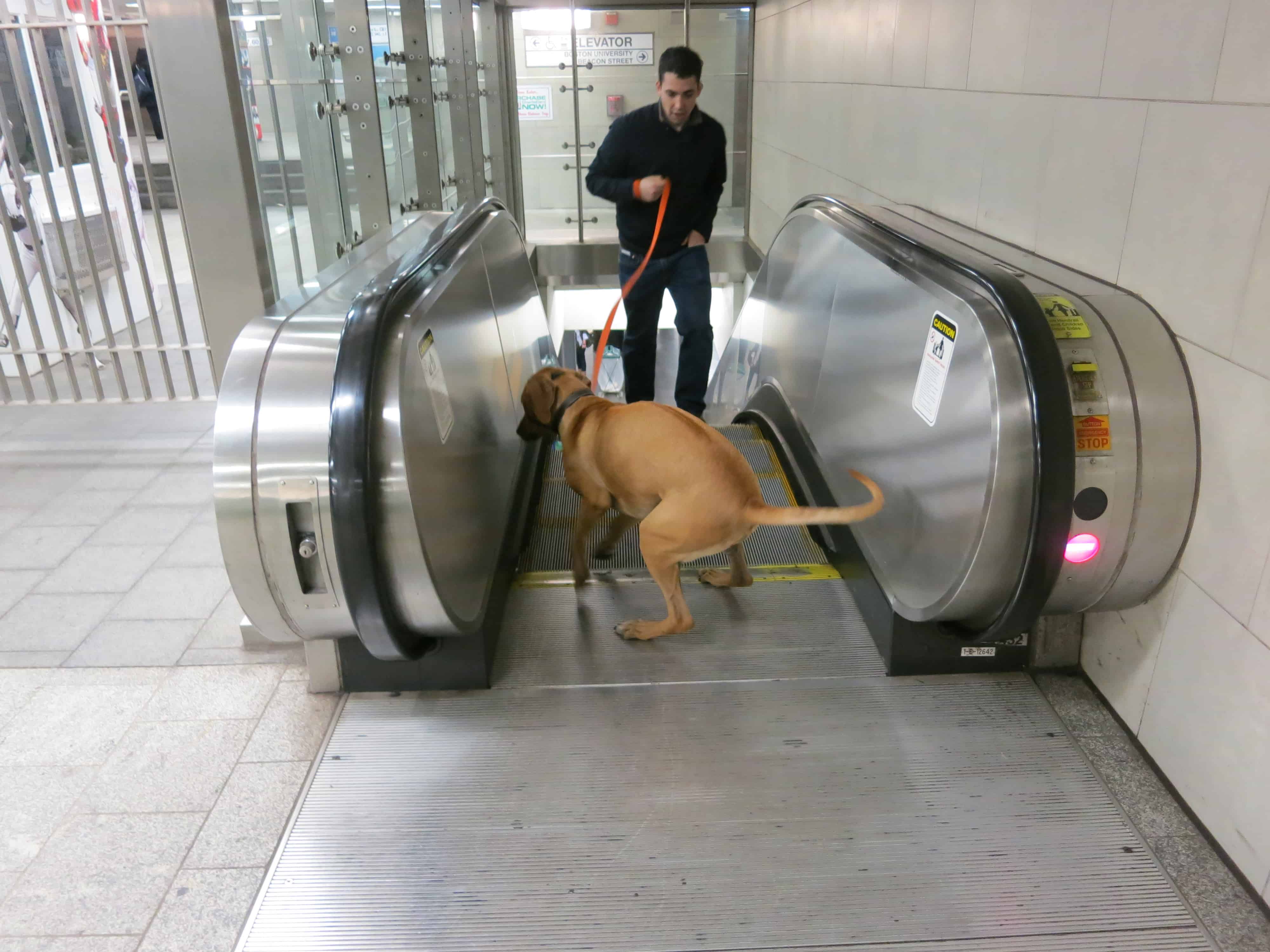 3. The “I didn’t think this all the way through” mistakes – When you have a pet, you often have to think for them and plan on their behalf.  Over the years I have gotten much better at thinking through my plans from Eko’s perspective to make sure incidents like the photo above don’t happen.

Stepping on an escalator was easy for Eko, but I clearly did not think about how he would have no idea how to step off. Eko retreated down the steps for a few bounds but eventually gave up and pulled a backwards jump to extricate himself.  The incident was a minor discomfort for Eko but it has stayed with me as a reminder to consider details ahead of time. 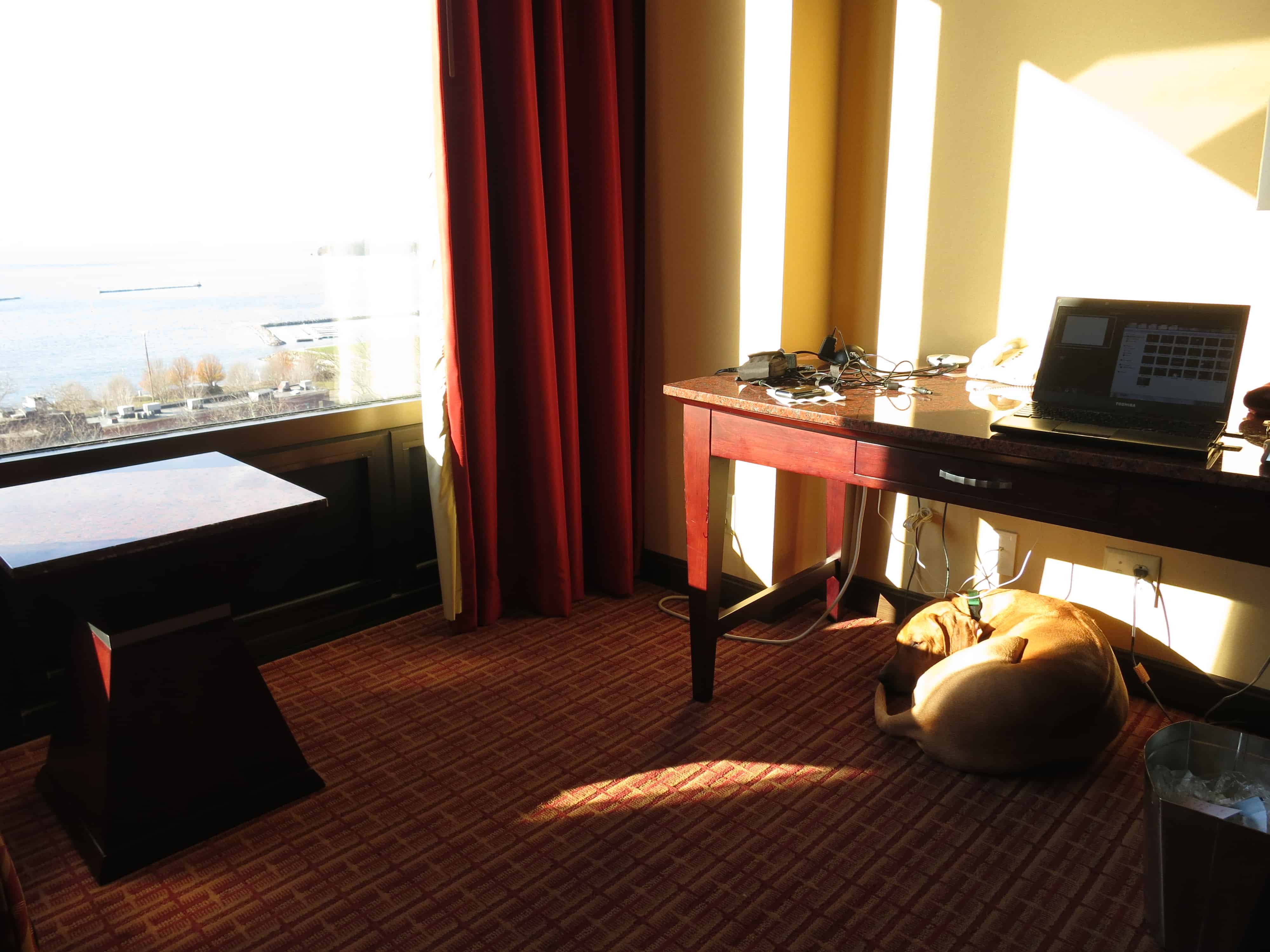 4. The happy mistakes – Luckily not all mistakes are scary or bad. For instance, I was mistaken when I thought I could put my feet under the desk at this hotel.  I should have known Eko always gets the sunny spots, no mater where they are. 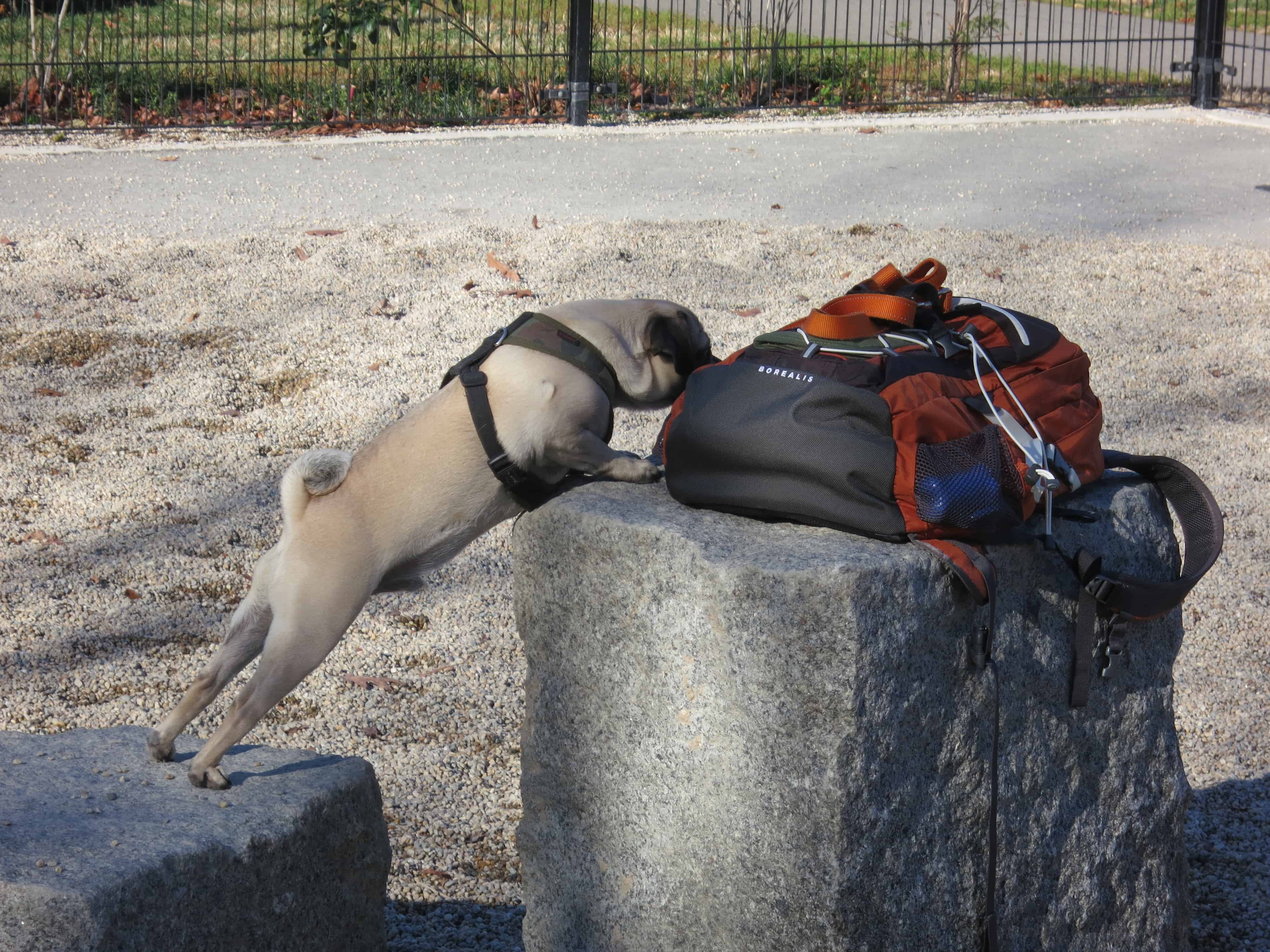 5. The “that guy” mistakes – No one wants to be “that guy” but unfortunately I have had a few “that guy” mistakes I need to own up to.  I was that guy who visited the dog park with lots of tasty treats in my bag that distracted all the dogs.  Not only that, I put the bag down!  Thankfully I had adventurous pups quickly show me the error of my ways 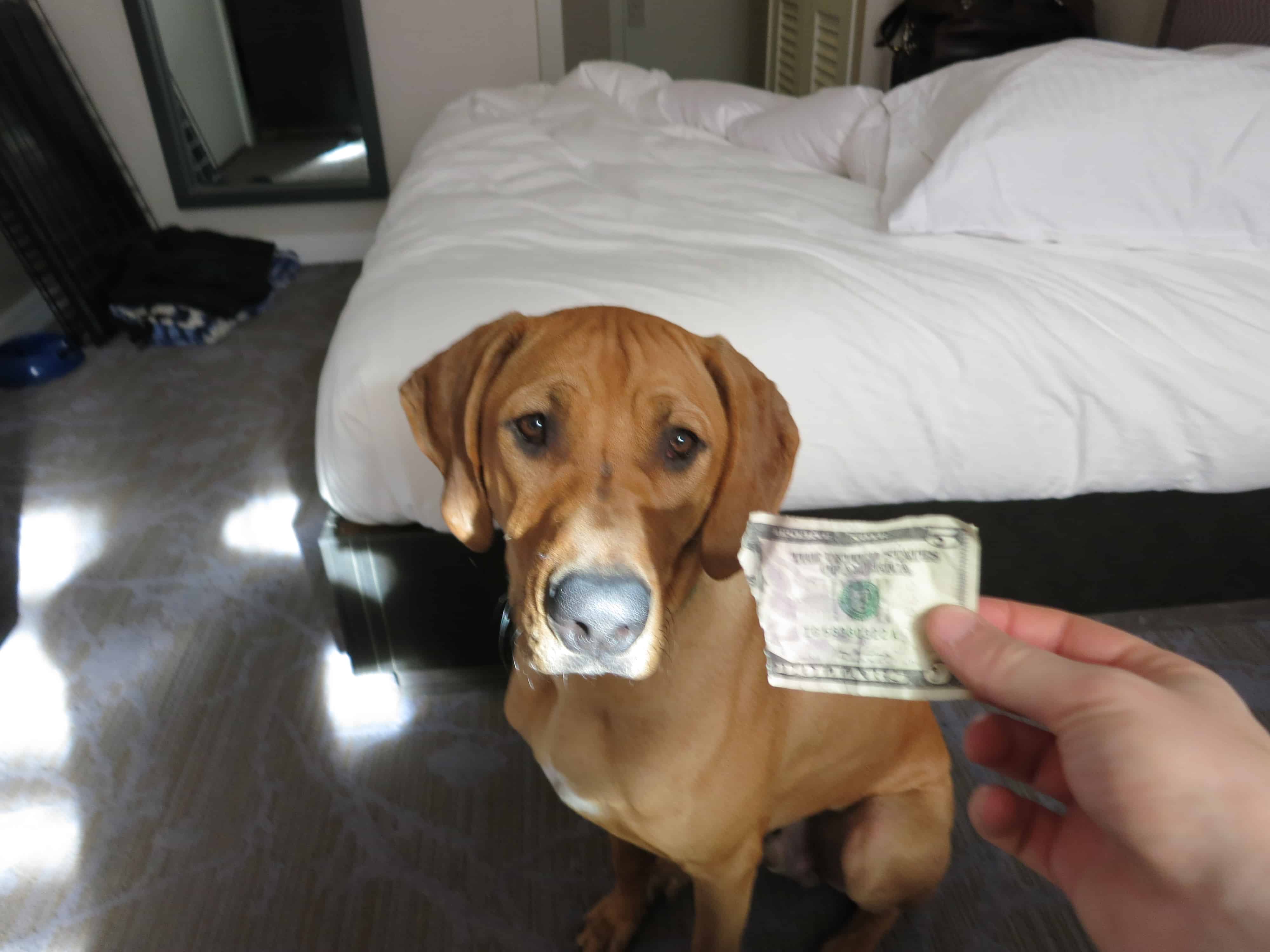 6. Random “Acts of dog” mistakes – Many insurance policies specifically exclude “acts of god” like natural disasters from their coverage.  Similarly there are some “acts of dog” which seem impossible to avoid.  I guess a dog has to try everything once and Eko once decided to try a taste of money.  Similarly, there was the one time he chewed through an unplugged power cord or gnawed on the couch corner.  He only ever did each of these things once so they were impossible to predict or prepare for

Mistakes, mishaps and misadventures are inevitable in life, especially when that life involves pets.  What’s most important is we learn and grow from those mistakes. Thankfully Eko is a forgiving and patient teacher who has taught me a whole lot!

Previous Post Life On The Prairie Back to all posts Next Post No Substitutes For Love? I Disagree.

Comments for My Pet Parent Mistakes? How Much Time Do You Have?