Remembering Ourselves Through Dogs

We forget almost everything. Life is singular and precious, but it is too expansive for our minds to hold in its entirety. We relinquish rote, routine and unremarkable memories willingly, hoping to save space for the occasions we cherish most. But the pernicious flaw of recollection is that we cannot always choose the moments we keep. So if memories are an imperfect inheritance from ourselves, how can we invest our fortunes today so that despite what we lose, our minds and hearts may be richer tomorrow? 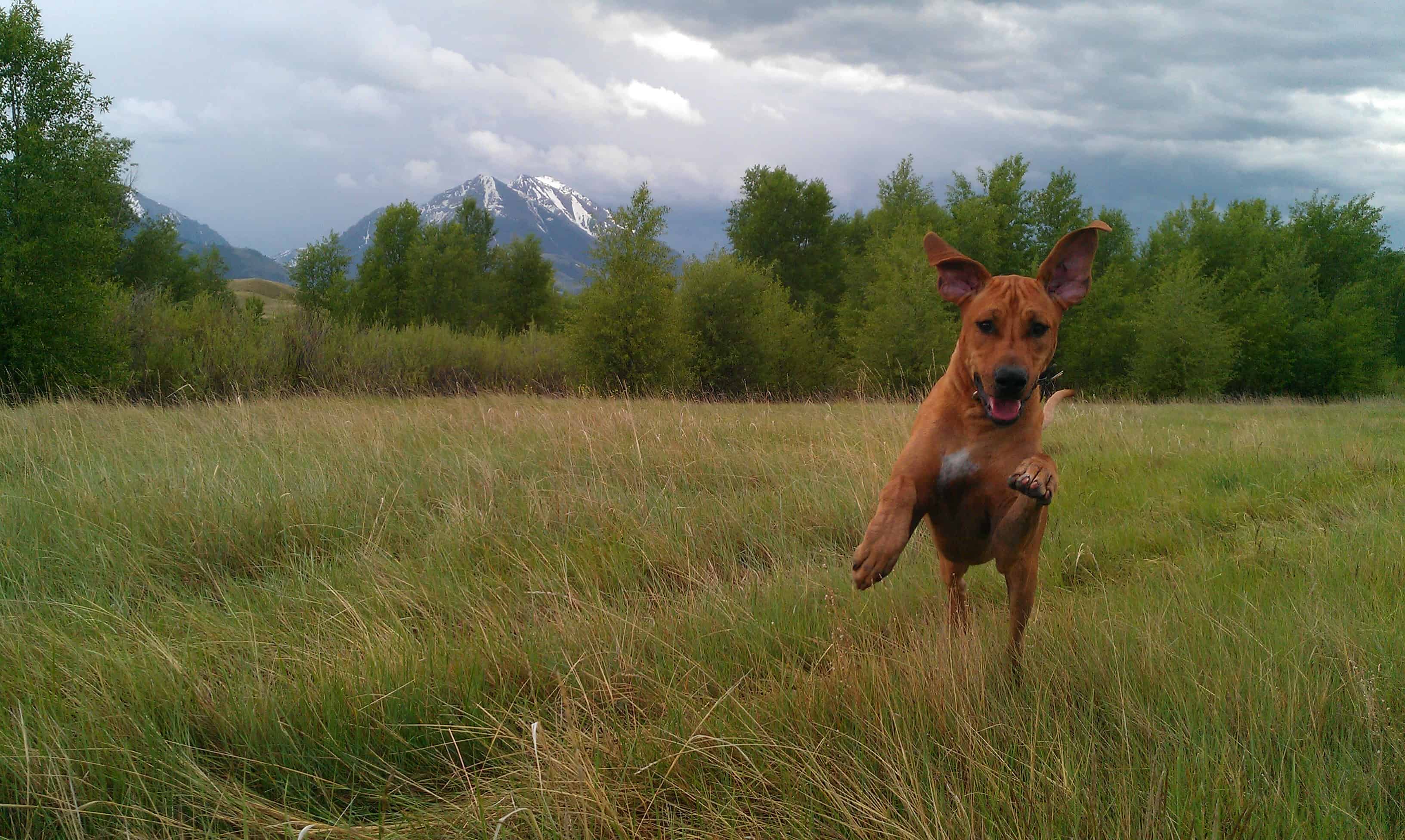 We forget almost everything. Life is singular and precious, but it is too expansive for our minds to hold in its entirety. We relinquish rote, routine and unremarkable memories willingly, hoping to save space for the occasions we cherish most. But the pernicious flaw of recollection is that we cannot always choose the moments we keep. So if memories are an imperfect inheritance from ourselves, how can we invest our fortunes today so that despite what we lose, our minds and hearts may be richer tomorrow? —— After 15,000+ miles and nearly a year on the road, I turned our red SUV, Clifford, into a long dusty driveway on a ranch just outside of Livingston, Montana. The dirt road gave way to grass at the edge of the small cabin where we would spend our last days of this cross-species, cross-country adventure. As I prepared to leash Eko with well-worn habit I stopped to look around at the vast expanse of property. I tossed the leash back into the car and set Eko free. He bounded joyfully through the long grass of early summer while I greeted my friend Patrick, whose family owned the home. Another friend of his was also staying for the week, and shortly after my arrival that friend’s friends showed up in a conversion van. I learned these guys had a band called Wheeler Brothers and they were in the middle of their own long tour. It seemed the cabin called to all of sorts weary travelers, offering quiet refuge to those in need. 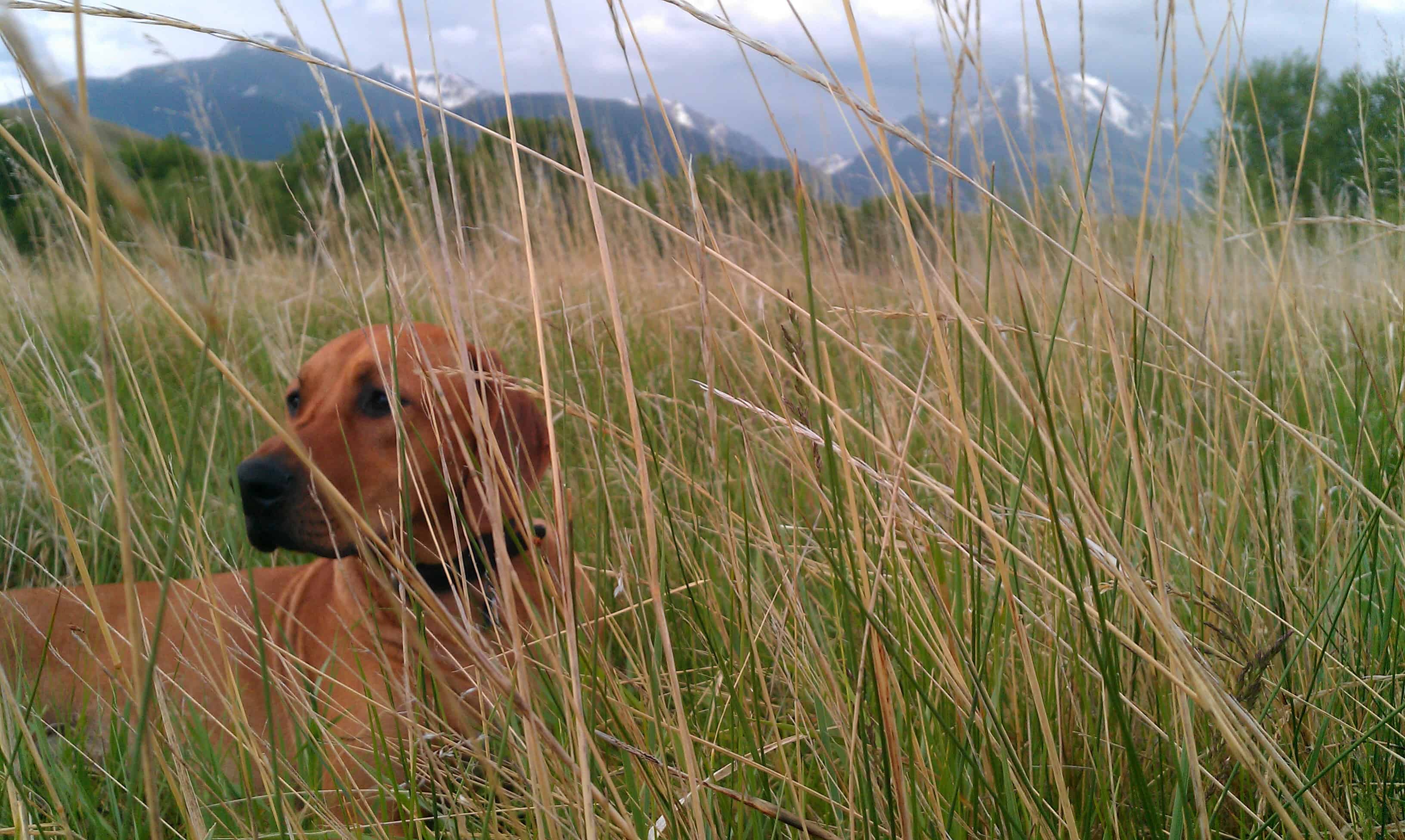 With many hands we made light work of preparing dinner. We sat around a fire pit, we watched the sun set, and we ate well. Perhaps Eko best of all. He nuzzled and kissed each one of us with undeserved reverence. They were confident, reassuring nuzzles which insisted we toss our doubts into the fire. They were wild, ecstatic kisses which demanded we believe ourselves worthy of such love. A small share of dinner seemed a paltry sum for the rejuvenation, but Eko asked no more than that of us. He then laid at my feet to bask by the fire while the sun faded over the horizon and summer constellations settled into place. When our wood and troubles burned low we extinguished them both and crowded back into the cabin. I slept a deep, restorative sleep. A sleep untroubled by the imperfections of the day before it or the expectations of the day to come. The next morning Eko and I hopped into the car for a trip to Yellowstone. One of the band members gave me their latest CD to listen to on the ride. Yes, in this ancient time compact discs were still in use. The bluesy-rock album provided an Americana soundtrack for our drive through the park. Gentle, warm winds swirled through the car and Eko titled his nose upwards to savor the untamed air. With the exception of a buffalo who decided to lounge in the middle of the road for a time, it was a smooth, scenic drive from the entrance to Old Faithful. 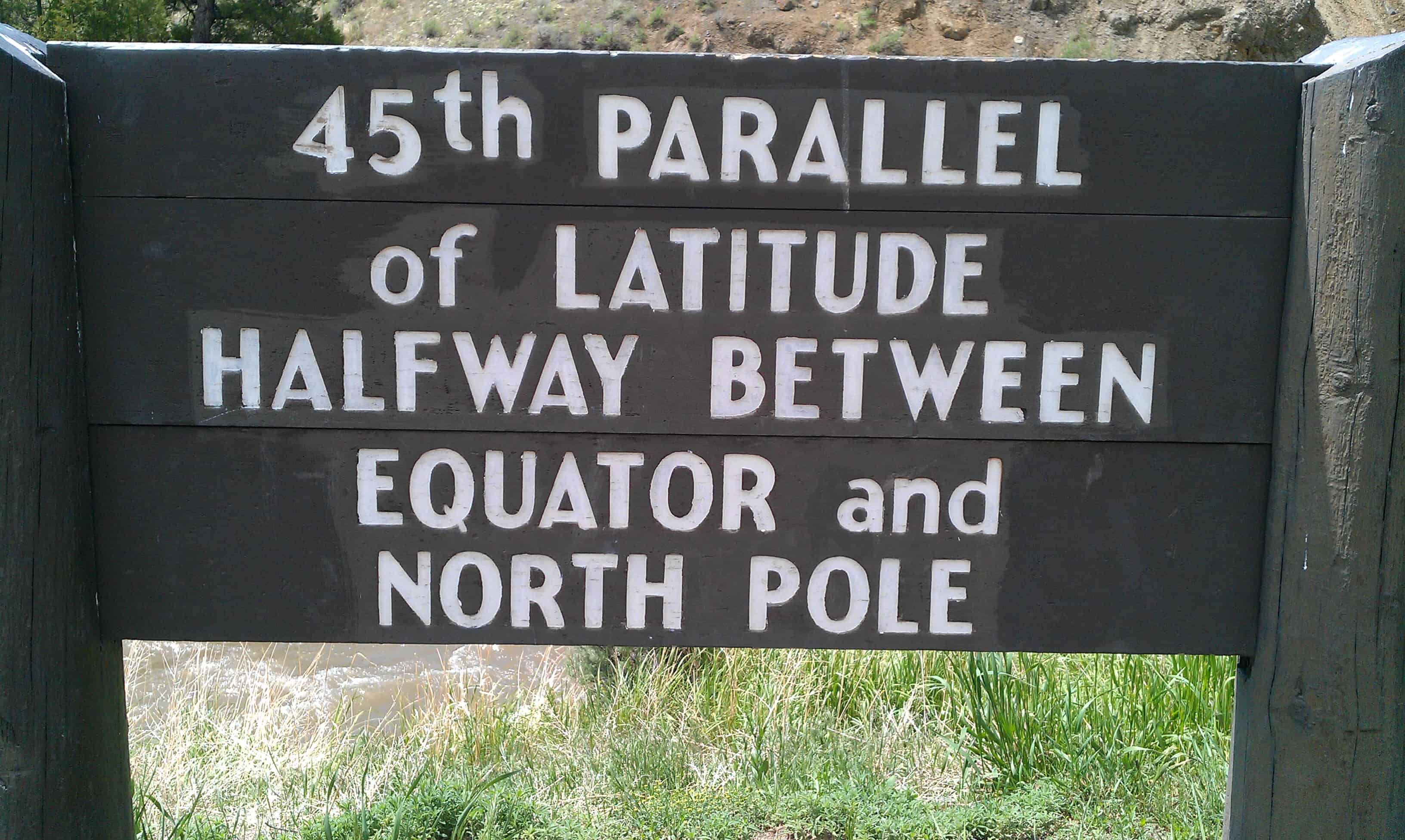 We arrived at the back of the gallery just in time for the show. Hundreds of people gathered in anticipation and you could feel a communal purpose in the moments before the superheated water shot skyward. I remember the geyser, but I have a better memory of studying the gathered congregation. After the eruption of anticipation/geothermal forces, a milling uncertainty settled over the crowd. A listless discomfort best captured by a woman next to me who asked her husband, “So…what do we do now?” Most everyone seemed to share his shrug and his unsatisfying answer of, “I don’t know. Get lunch, I guess?” While the people and geyser trickled away, we hit the road back to the ranch. I thought Old Faithful a fitting metaphor for our trip. Not just the trip that day, but for our entire trip across the country. It was a year of purpose and excitement. We swam in the Atlantic, hiked the Rockies and surfed in the Pacific. We paraded across grasslands and deserts, and we literally paraded at the front of a Mardi Gras parade. We ran through the serenity of deep forests and the cacophony of city streets, reveling in them both. We were a geothermal event, reaching for the sky, calling for all to come see how high a heart may soar when lifted by the warm, enduring love of a dog. 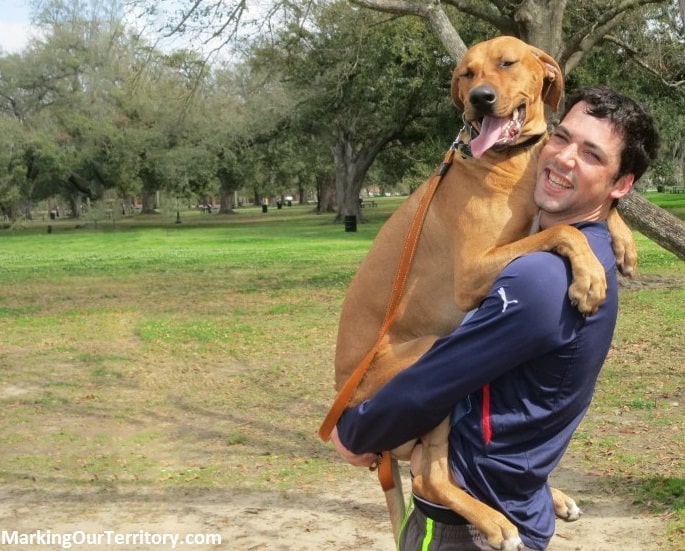 Like the geyser behind us, our show was trickling to an end and I wasn’t sure what to do next. Because it’s easy to steer when guided by major landmarks and life events – the difficulty is navigating the world when the course is entirely up to you. We lazed a path back out of the park, letting the CD play through on repeat. It was our anthem of the adrift and uncertain. The sun had just begun to set when we pulled back into the ranch. Patrick called us over to his four-wheeler to join him for a tour of the property. I hopped on board but when I told Eko to jump in with me he declined. Instead he wagged his tail impishly and gave a big, bouncing bow. The kind he gave when he was eager to play. Eko had seen the four-wheeler in action  before and after sitting in the car all day I knew exactly what he wanted. “Alright then, let’s do it,” I said. Patrick needed no encouragement and we accelerated down the path. Eko leapt into a gallop and kept pace aside us. Thinking himself a gracious host, Patrick only half-pressed the pedal so as not to leave his guest in the dust. But Eko stayed nose and nose, then pulled ahead, daring us to go faster. Patrick obliged. The cart and dog raced aside each other at top speed across the sun-drenched field. If not for the fence at the property’s end it seemed we might go on until one of us ran out of gas. Based on Eko’s huge smile when he jumped up to greet me I wouldn’t have bet against him. https://www.youtube.com/watch?v=DMKNXsIzF0Q We returned to the ranch at a more leisurely pace. On his triumphant trot back across the field Eko found a large deer antler and carried his prize to the porch. He set to work on trimming the antler down, the beginnings of a labor of love which would take him the better part of three years to complete. Our last night at this waypoint was like the others – quiet and uncomplicated. Before turning into bed I sat alone with Eko underneath the stars. There was no grand contemplation or cosmic event. Just a brief, wonder full moment with my dog. Early the next morning we turned from the dirt driveway back onto the paved road for the long drive to Chicago – our new home and our final guidepost. I had no idea what we would do next, but our short stay in Montana reminded me how most of what’s worth remembering in life happens beyond the boundaries of monuments and monoliths. —— 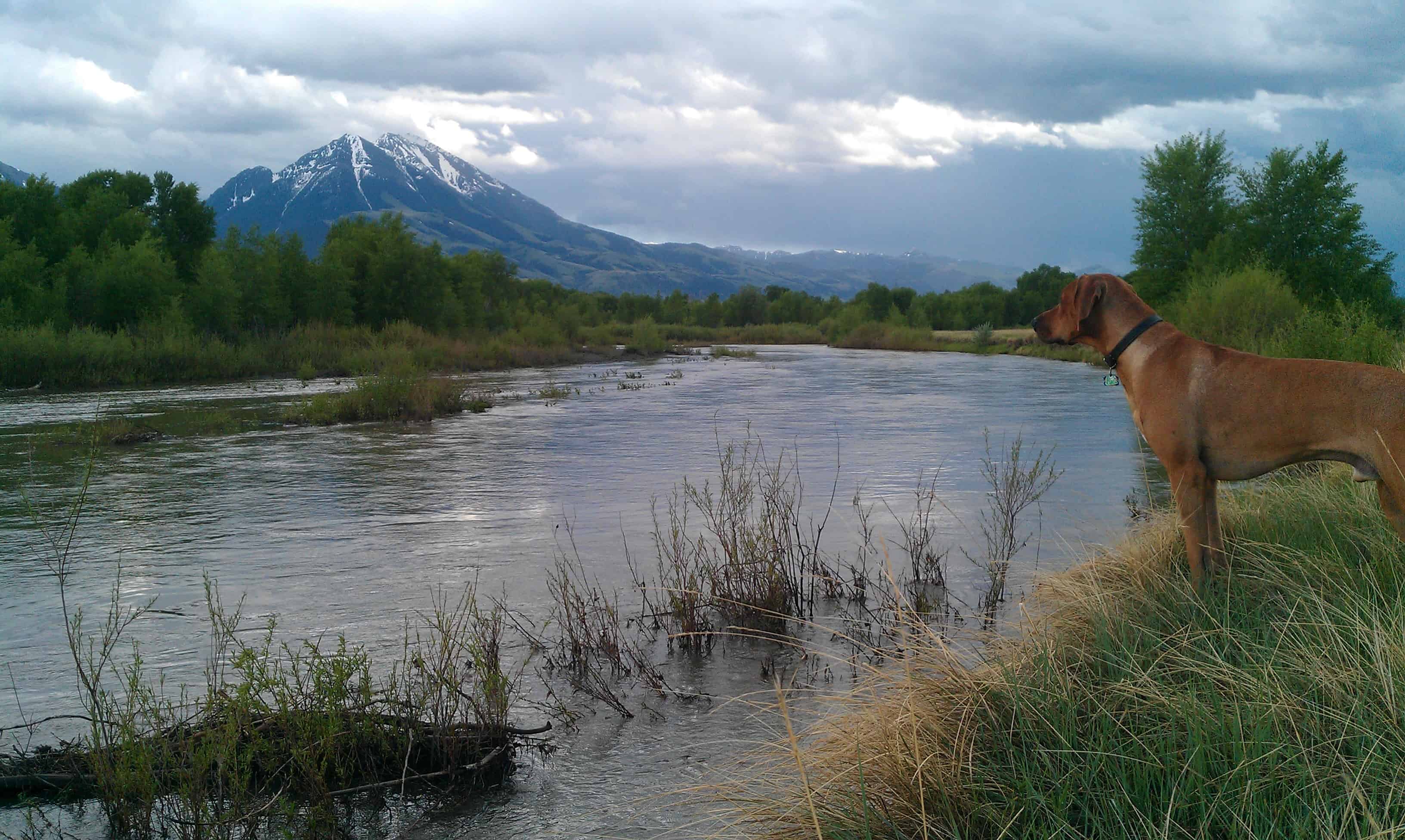 Six years later, writing these words, I still remember those days in Montana vividly. This, despite the fact we did less there than at any other stop on our journey. And the ostensible highlight of the trip – Old Faithful – is what I remember the least about. For a long time I think I mistook landmark events for landmark memories. I believed the greater the exploit the more valuable the memory. Yes, all the incredible places we visited and all the adventures we had provided us with joyful purpose and meaning. Yet none of those memories are as meaningful to me as the ones I have of watching Eko lick faces around a fire, racing with him across a field, or silently sitting together under the stars. It seems then it is less important what we remember and more important who we remember. Family, friends, pets, and others, yes. But above all else, the most valuable memories are a reunion between who we are and who we once were. Each memory a star in a constellation that shows us the true shape of ourselves. But identity is ephemeral. Memories of identity even more so. To better capture ourselves in memory we attach them to people, places, songs, or some other touchstone of our choosing. Looking back, I know now that my dogs are invaluable touchstones in my own life. They are living extensions of my memory whom I entrust to hold all the moments, feelings and identities I might otherwise forget. This is why I traveled with Eko then, and why I continue to bring my dogs with me wherever I go. I still lose most memories, but I know my dogs hold fast to the single, continuous memory which matters most. When I remember my dogs, I remember myself. 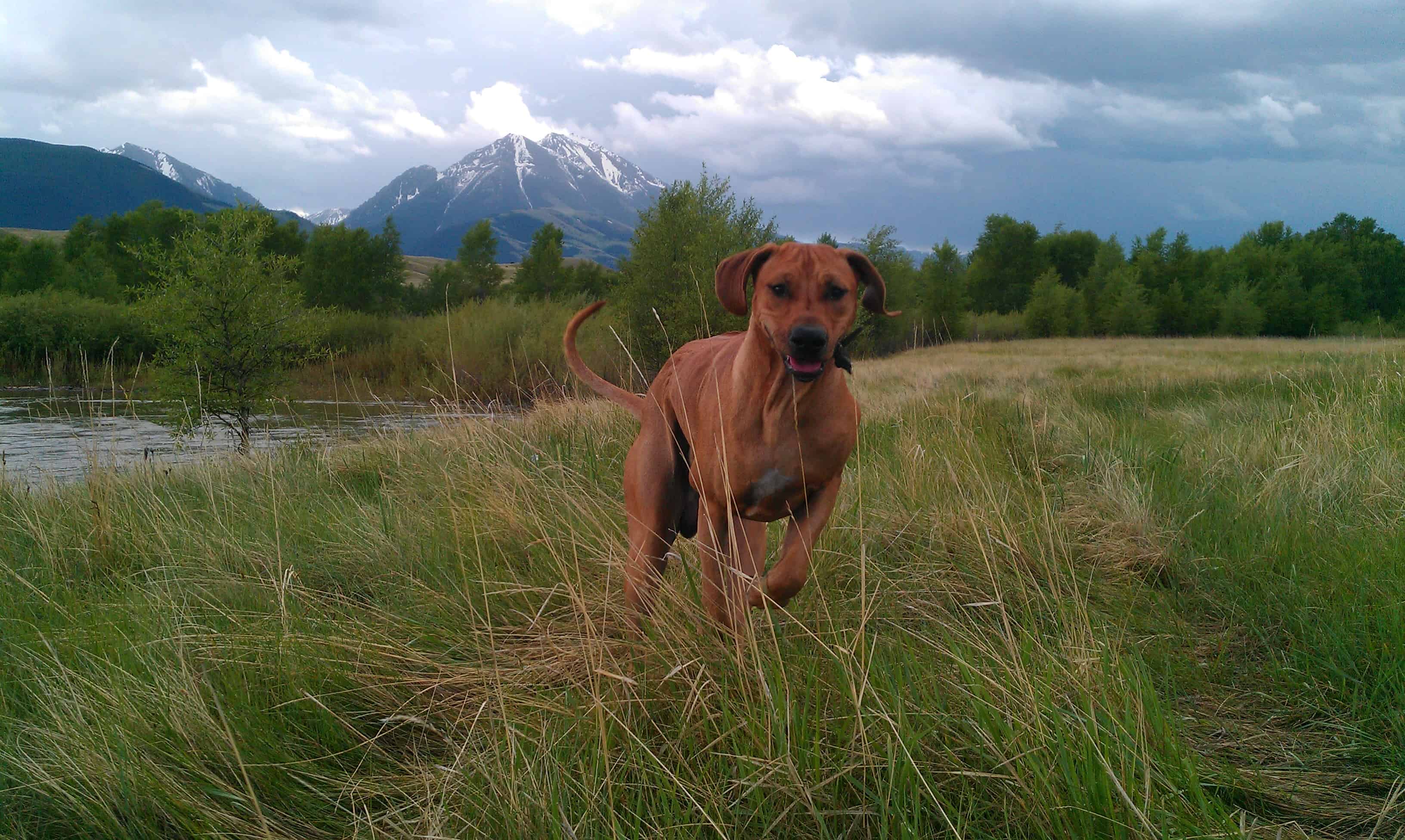 Previous Post [VIDEO] Rhodesian Ridgebacks vs Snow Back to all posts Next Post [VIDEO] Dog Training Mistakes, Mishaps and Failures