If you’ve spent any considerable amount of time with a dog, you have a story. That story. The one you tell at cocktail parties and retell at every family gathering. That story is not the fuzzy warm memory of the first time you held your puppy. Nor is it any of the wonderful moments you share with your dog over the years. Oh no. That dog story is the one which begins with rueful laugh and the words “Oh God…” It’s a story about the magic of dogs. Not the oft celebrated magic of their love and companionship, but the magic of their ability to cause a seemingly impossible amount of trouble. 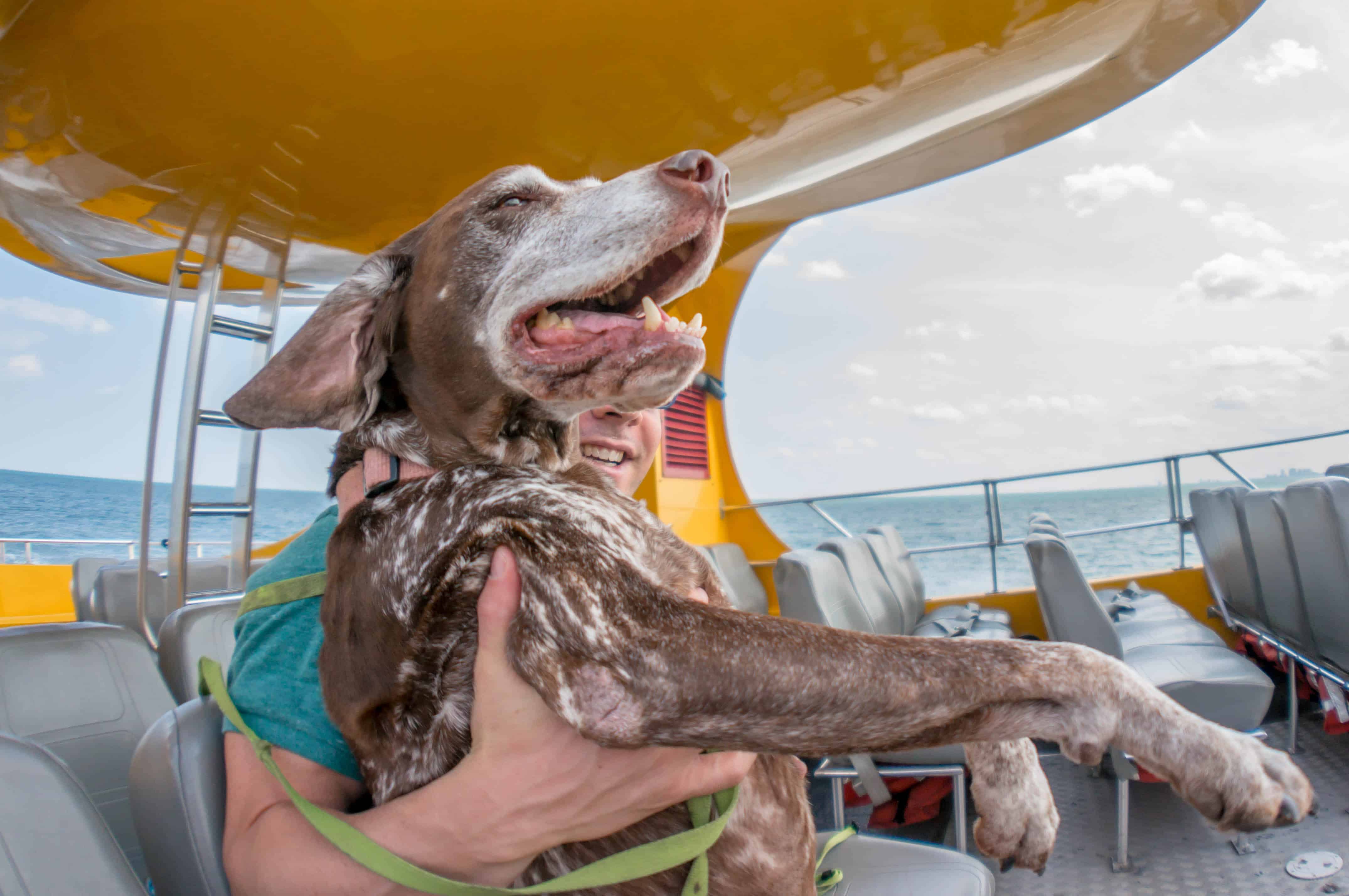 If you’ve spent any considerable amount of time with a dog, you have a story. That story. The one you tell at cocktail parties and retell at every family gathering. That story is not the fuzzy warm memory of the first time you held your puppy. Nor is it any of the wonderful moments you share with your dog over the years. Oh no.

I’ve shared many stories here, but I’ve yet to share that story. It’s from a time before Penny, before Eko and before this blog. Allow me to summon the memory (Oh God…) and begin.

I graduated college without a job and I was completely adrift. James, my older brother, graciously agreed to foster his stray younger sibling until I got on my feet. James lived in a small one-bedroom apartment in Washington, D.C. that got even smaller when I plunked down a twin mattress in the corner.

Unemployed vagrants are generally not the most popular houseguests, but I received a hero’s welcome. The welcome was from Dutch, my brother’s German Shorthaired Pointer, but at the time I needed all the encouragement I could get.

James worked long and irregular hours, so Dutch and I spent a lot of time together. Unlike myself and my family, Dutch was pretty psyched I was unemployed and always home. Common wisdom says to properly take care of yourself before caring for others, but I found that caring for Dutch ahead of myself was the best way to rejuvenate my own life.

Dutch and I walked, jogged and played fetch together. He’d hang out on the couch with me as I searched for work. I barely fit on my twin mattress, but at the end of the day I always found room for Dutch to hop up and sleep between my legs.

When I returned to the apartment after job interviews, I’d hear Dutch’s excited pattering of paws on the other side of the front door. Except when I didn’t. On those few occasions when the apartment was silent I knew I’d find the carpet pulled up, or some papers shredded, and Dutch huddled guiltily in the corner. I’d quickly fix the mess and call Dutch over for a hug. He was my only ally, and I wasn’t about to get angry at the pup who stood by me when times were tough.

Now, here’s where things get good. Or bad, depending on your point of view. Because after weeks of hustling I finally landed a job. Is it specifically because I got a job, and thus ended our bucolic life of romping, that Dutch did what he did next? I can’t say. All I know is that he did it on my first day of work, so I’ll let you divine whatever significance you like.

The first day of work – any work really – is always blissfully naïve. You dress in your nicest clothes, you dream big dreams about your future, and you ignore the inevitably that someone less intelligent, less kind and less hardworking than you are is in upper management.

I loved that first day. After work, my coworkers even invited me to stop by the bar with them. I walked home beaming ear to ear, feeling on top of the world. A new job, friendly coworkers and a few beers will do that to you. After struggling to tread water for so long, I felt like I was finally the one making waves rather than the one being swept up by them. 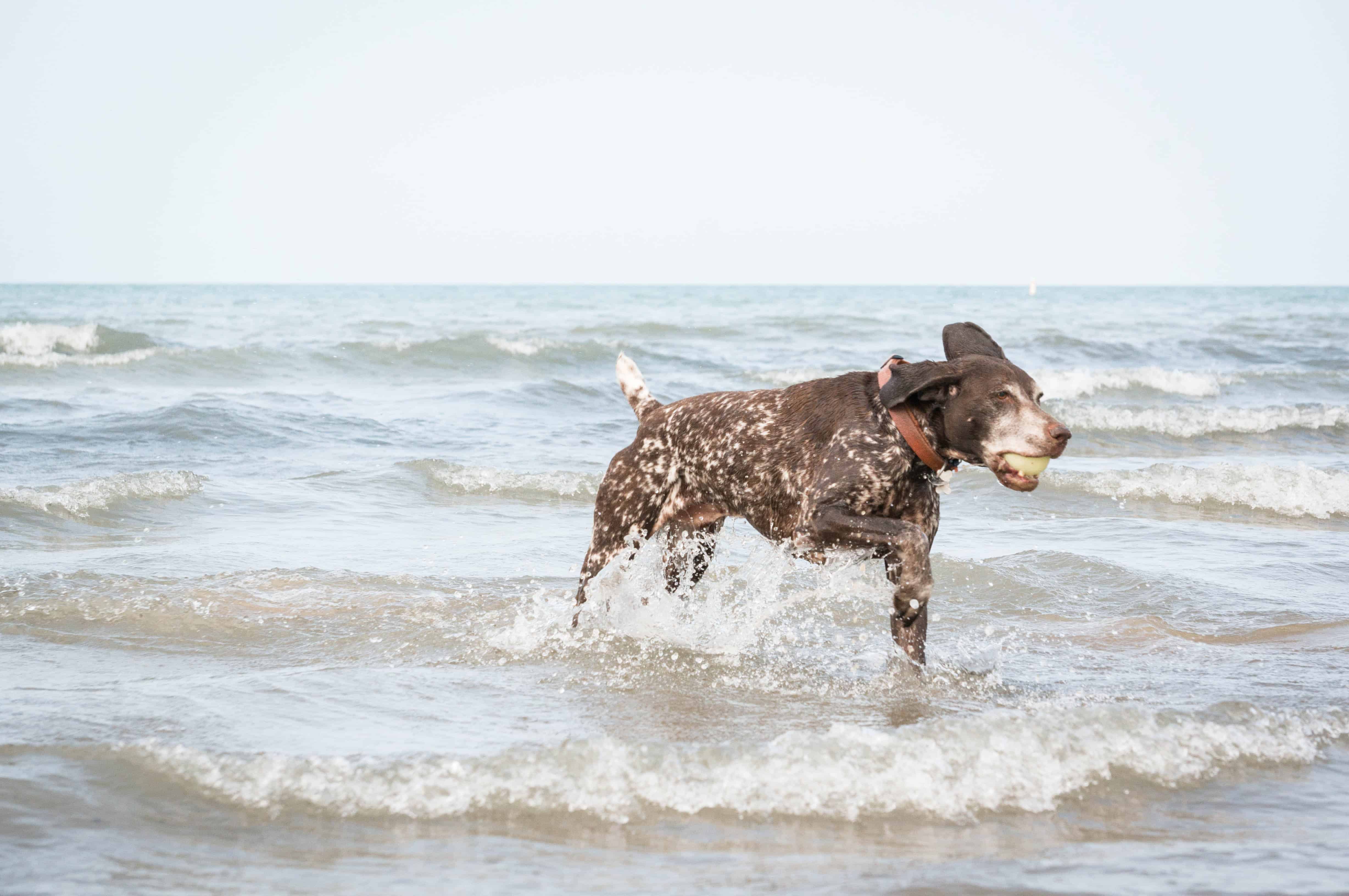 I did miss my long days with Dutch, but I soon discovered I’d be having an interminable experience with him…

I bounced up the front steps of James’s apartment building, and still supercharged from my day, skipped a slow elevator ride in favor of a Rocky jog-of-triumph up the stairs. As I approached the apartment I heard no pattering of paws. The tense silence seemed heavier than usual, but I opened the door whistling for Dutch, content there was nothing he could have done to knock me off cloud nine.

How wrong I was.

“Oh, God…” I coughed, attempting to suppress a gag. It appeared as if a pack of wolves were dining in a Chinese restaurant and an unfortunate gas leak caused the entire place to explode. The Devil himself would have described the smell as, “a bit too evil for my tastes.”

And there, in the only clean corner amidst the carnage, sat Dutch. Tail wagging, giving me his best “Can you believe a Chinese restaurant opened in here while you were gone, served a pack of wolves, and then they all exploded, and I had nothing to do with it!?” face.

I’m not a smart man, but I quickly figured out that Dutch did not agree with my brother’s assessment our Chinese takeout leftovers had gone bad. Thus he helpfully removed the food from the trash and had himself a lovely buffet while I was at work.

Without going into graphic detail it’s difficult to describe just how obscene the apartment looked. In terms of physics, it didn’t seem possible that a single dog could produce such a prodigious amount of bodily excretion. Nevertheless, the truth was staring (and wafting) at my face.

Despite the preposterous scale of the devastation, the first order of business was to ensure Dutch was okay. Somehow, he’d come out of the ordeal entirely unscathed and, as always, looked at me happily with a bone hanging out the side of his mouth like a cigar. 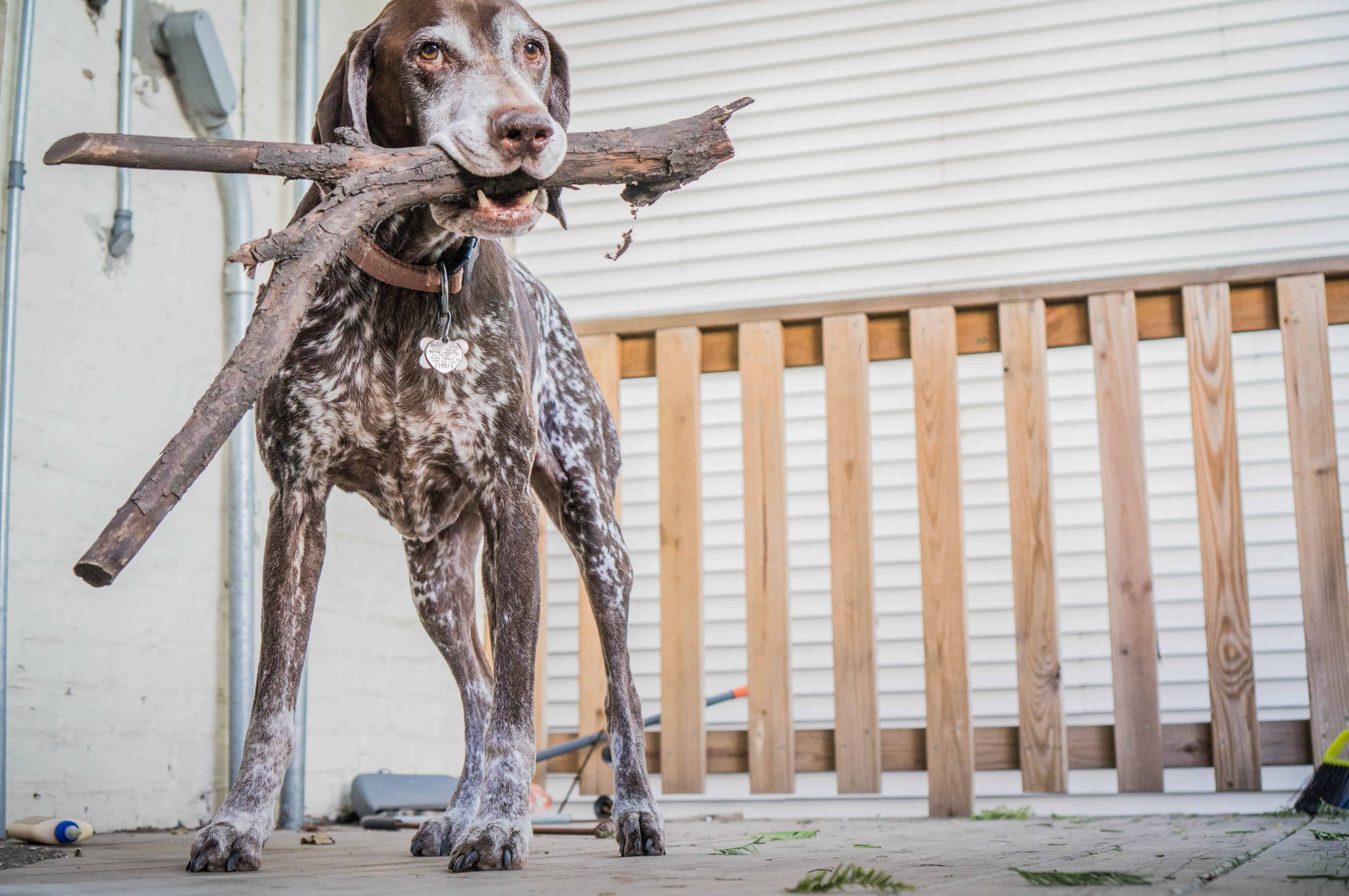 He looked just like he does here, except the background was infinitely more horrific

Next, I considered taking Dutch outside. But it would have been impossible to bring him out and back without making the mess worse. Besides, since he’d evacuated the ship from stem to stern I figured there was no way he had much left in him.

But there was plenty left for me.

I stripped down to boxer briefs, armed myself with every cleaning product in the apartment, and  got to work. Again, I’ll spare you the gory details, but over the course of the next hour I filled three large trash bags with the contents of the crime scene. I was sweaty and disgusting, but in the end I’d brought the apartment back to a habitable condition

Now, here’s where the story gets better. Or worse, depending on your point of view. I knew I needed to take Dutch out before I cleaned myself up, but I refused to touch any of my clothes for fear the Environmental Protection Agency would make me destroy them afterwards.

If you have a dog, you’re intimately familiar with their uncanny ability to dissolve the part of your brain which cares about what other people think of you. Which is how I found myself striding down the hall towards the elevator – Dutch in one hand, three bags of bio-waste in the other, wearing boots, my boxer-briefs, and nothing else.

I left my sanity back in the apartment with my clothes. I just needed to take out the trash, get Dutch to pee and then get in the shower. I saw one neighbor on my way to the elevator, but he thankfully gave me a neighborly “For both our sakes, I’m going to pretend this never happened” glance of horror.

Our building had the slowest moving elevator I’ve ever been in, so I was relieved to find it already waiting on my floor. Doors open, inviting, ready to whisk us away. I pressed the button for the basement and let out a heavy sigh as I leaned against the back of the car. The doors slid shut, the elevator began its glacial descent, the elevator stopped.

And thus began the five stages of grief. 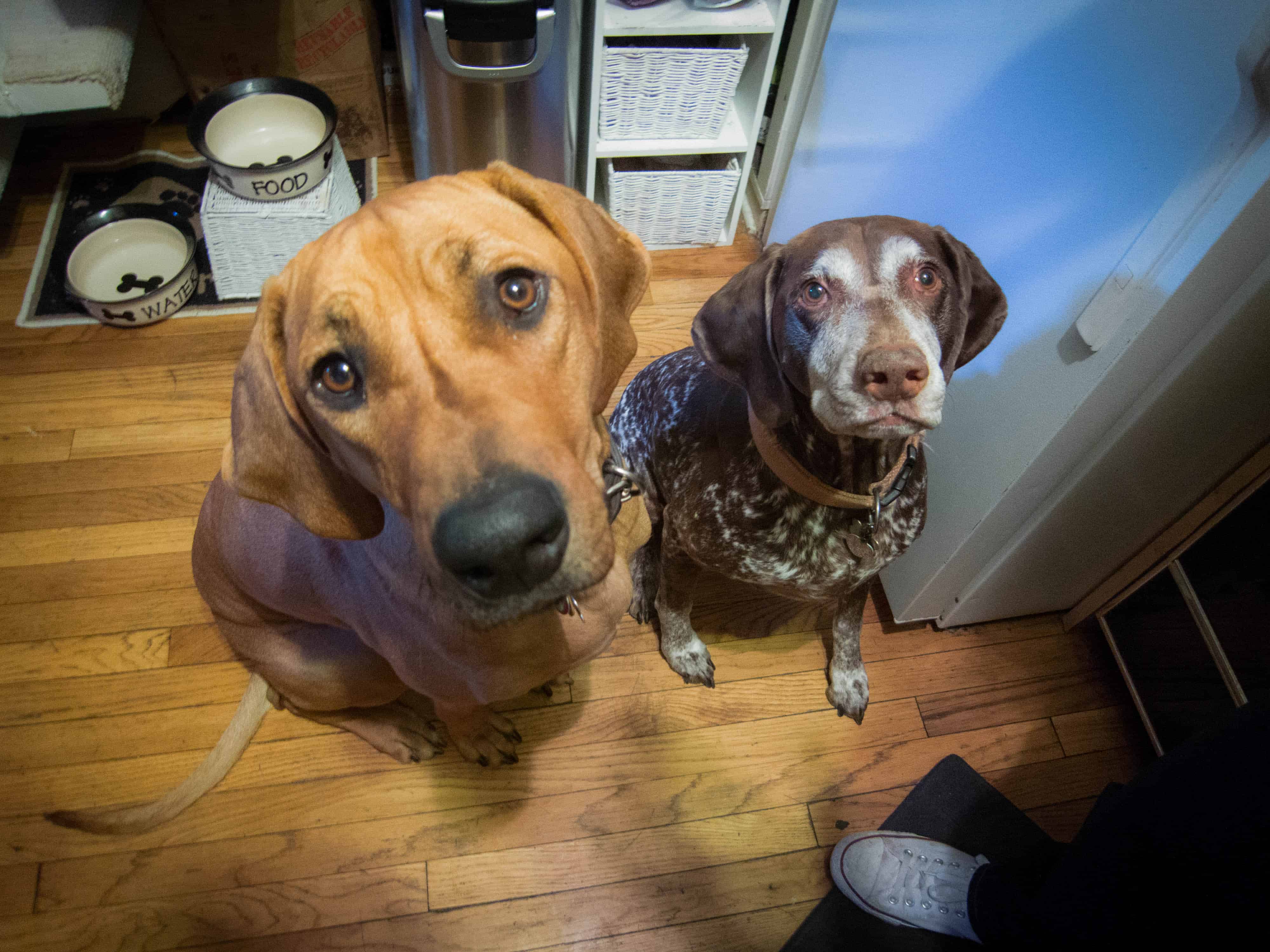 This is about the size of the spacious elevator we were in.

Denial. “Wow, that was a quick trip to the basement, I must have spaced out.” I lied to myself. “Oh, I must have forgot to press the button.” I laughed as I pressed the basement button again and nothing happened. “No big deal, I’ll just take the stairs.” I thought as I frantically pressed every other button to no avail.

Anger. “ARE YOU KIDDING ME!” I yelled. I pounded on the sides, floor and ceiling of the car. I jammed the “emergency” button of the antiquated car only to discover that instead of calling the fire department it simply let out a quiet dinner-bell-like sound. “HOW QUAINT!” I mused, throwing in a few expletives for good measure.

Bargaining. After half an hour, someone finally heard the damn bell and called the building manager. I tried to negotiate with him to pry open the door for me. He refused. I’ve watched too many action movies because I then tried to climb out the top of the elevator.

Depression. “The elevator repairman said he could hopefully get here in two hours,” the building manager told me.

“That’s great, just let me know when he’s here so I know when to stop crying.” I said.

“THAT’S GREAT!” I said in an exquisitely deranged voice. We didn’t talk much after that.

Acceptance. Life is weird. You think you’re having a great day and then you come home to an intestinal apocalypse. And then just when you think you have that under control, you end up stuck in an elevator with three bags of that apocalypse, the dog who caused it frantically pacing, and you’re also pretty much naked.

Three hours after we began our ride, Dutch and I (and our lovely prize bags) made it to the basement. I’ll never forget the look on the repair technician’s face as he opened the door. “Don’t ask.” I said as I raced past with Dutch to dispose of the trash. As suspected, Dutch had nothing more to offer than a quick pee.

We returned to the apartment (via the stairs, and only the stairs for the rest of the time I lived there) and Dutch contentedly hopped on the couch while I soaped myself raw in the shower. James got home from work just after I exited the bathroom.

“What do you want to do for dinner? I threw out that Chinese food because I think it went bad,” he began.

“Yeah, I know. And trust me, it’s far from the only thing that went bad around here.” I laconically replied.

I’ve forgotten most of the days between that day and this one. But thanks to Dutch, I’ll never forget the time I learned it’s possible to have both a great day, and quite literally, a crap day. 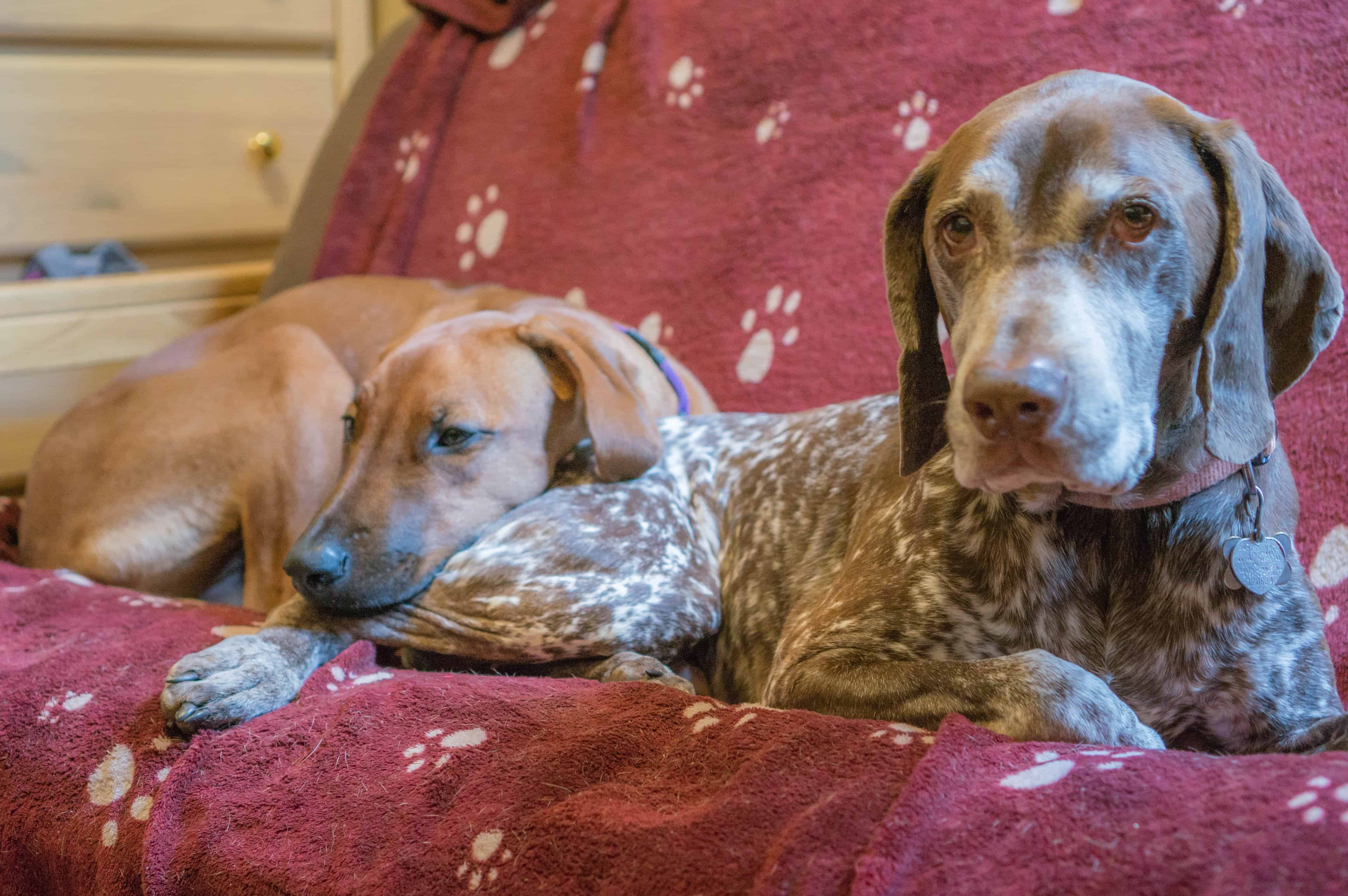 Funnily enough, things came full circle when I hosted Dutch and James at my apartment in Chicago. Dutch graciously let another young upstart curl up with him.

So that’s that story. What’s yours?

Comments for That Dog Story