Tomorrow, Penny Mayhem turns 8. If there was ever an age that belonged to my girl, it is this one. The number whose symbol is infinity stood upon its head. Fitting, because in a race between Penny and our infinite cosmos, infinity is starting to sweat.

Science can’t answer why our universe’s rate of expansion is increasing, but I know the truth – 93 billion light years might not be a safe distance from Penny. And so even the stars rush for the exit.

I can’t say I blame them. At 8, Penny is at the height of her powers. It’s been a privilege to witness her rise. From a shrapnel grenade puppy, to a razor sharp adult. From a kid sister, to a peerless matriarch. From a creature ruled by mayhem, to one who rules over it.

My front row seat also privileged me to be first in line for all the scrapes, scraps and screams which proximity to Penny elicits. As a younger man, I tucked these failures and flaws away – thinking they made me unworthy. It was Penny who demanded I realize our past suffering and our willingness to suffer again is the only thing that makes us worthy.

Ridgebacks are exalted for their strength and speed and prowess, but a lion fears none of these things. It is a Ridgeback’s ability to suffer and endure a beast it should rightfully run from which terrifies the king. What a frightening thing it would be to have the full brunt of your power brought against a foe who not only accepts it, but chases you down for more?

From the beginning, Penny taught me to suffer and endure. In those early days it often felt like we were mismatched adversaries and I was the one suffering defeat. It took time for me to understand Penny needed me not to suffer for or against her, but with her. She didn’t need a master, she needed someone to help her master herself.

And in the midst of that revelation, Eko died. The anchor of both our hearts cut away. Looking back, it was a tempest which could have driven us apart had Penny not lashed herself to my sinking soul. Not to pull me to safety. No, never that with my Mayhem. She dragged me right back into the storm.

It was entirely against my will, but Penny was undeterred. She demanded I get out of bed and insisted we go for a walk, or a run, or a trip to the beach. And each one of those things was excruciating for me. Because of Penny I suffered, but because of Penny I endured. Together we chased after the lion of our shared grief until it collapsed.

The years since have fortunately been filled with a more joyful suffering – that which accompanies a puppy and two babies! And though I’d grumble while carrying Zero down four flights of stairs to pee in the middle of the night, and groan through sleepless nights with a newborn, I did so with a new appreciation for the costs we pay for love.

That, I think, might be Penny’s greatest gift to me. The ability to embrace suffering with my whole heart. To face it, welcome it, and have it see the diminutive demon by the side. And then to watch my suffering realize it would be best to join the stars in their flight away from this place.

As ever, we’ll head to the beach to celebrate my girl. Everything and nothing changed from where we began this journey together. As Penny loops through the sand she’ll leave her trademark figure eight. And I’ll be content. Knowing that whatever suffering the future holds is temporary, but that love and Mayhem are infinite.

Previous Post Rhodesian Ridgeback Puppies for Sale! Back to all posts Next Post The dog who believed in my brother 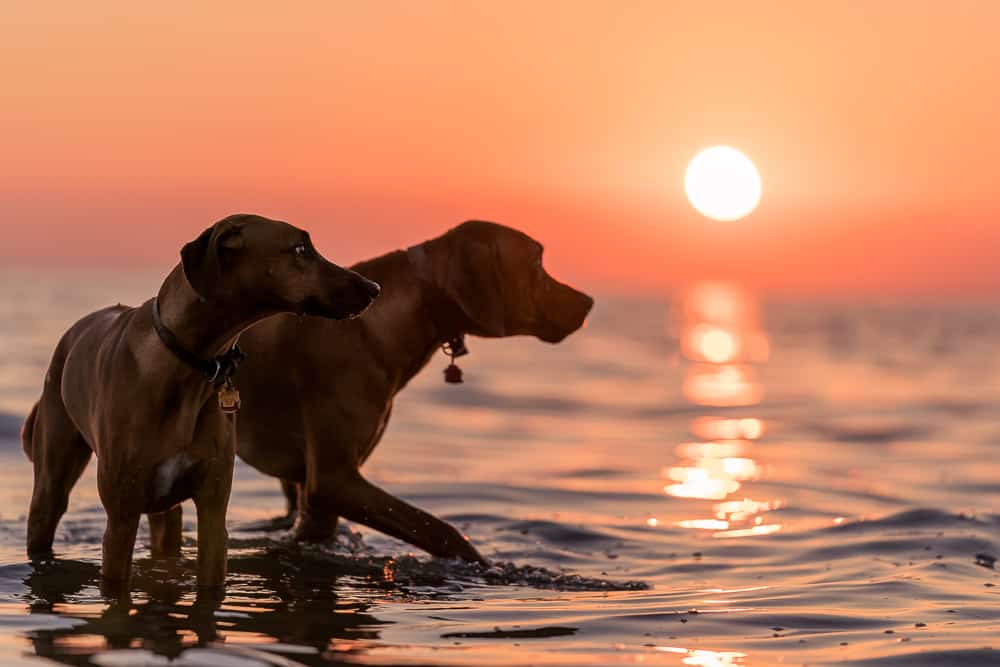 When Should You Spay or Neuter a Rhodesian Ridgeback?

Showing a profound lack of judgment by the people at Google, my site often ends up at the top of search results for questions about Rhodesian Ridgebacks. My qualifications for such prestigious placement are that I have Rhodesian Ridgebacks, I have a camera, and I have a very loose understanding of how to control both of those things. That said, I’m always happy to share whatever knowledge I’ve picked up along the way. I can’t offer the expertise of a veterinarian or behaviorist, so I simply try to share the perspective of what an average owner might experience. Read More

Comments for The Age of Mayhem