We have the new first lady! It’s been a wild 24 hours but she’s home safe and sound… and rowdy! She’s sleeping now, but probably not for long so let’s get right to it. For those who wonder, “Won’t mommy-dog miss her puppies?” I present this photo. 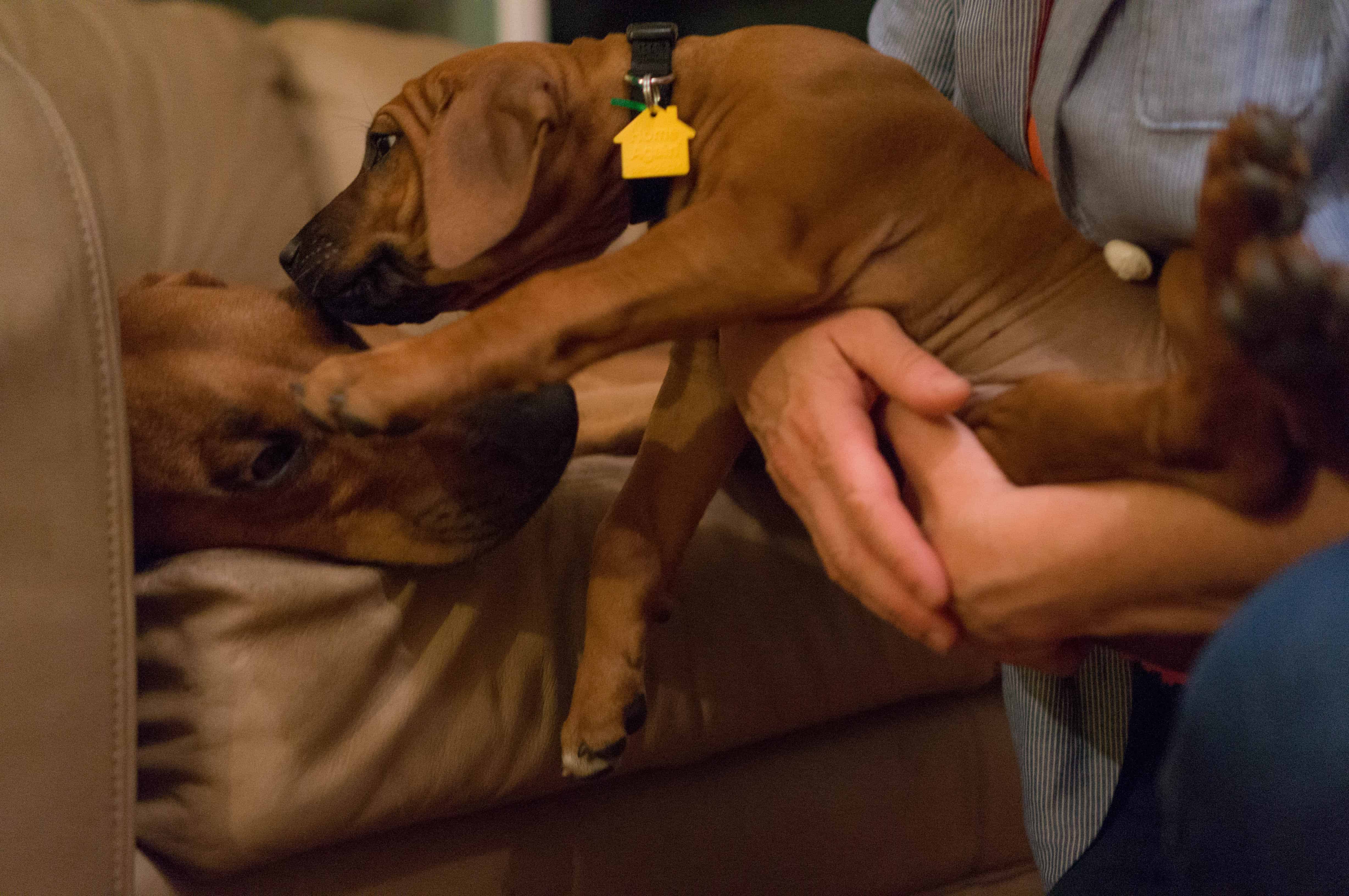 We have the new first lady! It’s been a wild 24 hours but she’s home safe and sound… and rowdy! She’s sleeping now, but probably not for long so let’s get right to it. For those who wonder, “Won’t mommy-dog miss her puppies?” I present this photo. Molly’s work is done here, she raised her pups and is now happy to see them go so she can get some sleep! Before we left, my girl stoically and cutely endured one final l nail clip

At home we gave the pup a bit of time to acclimate before she met Eko and Auggie. I wanted to make the meeting as casual as possible, so without much fanfare I let Eko come in the kitchen to assess the scene for himself. After a thirteen hour car trip one day, meeting Auggie the next day and then meeting another puppy last night, I think Eko was a bit overwhelmed. He sniffed the pup but was mostly uninterested. The pup on the other hand grew up with Ridgebacks so recognized Eko immediately and stalked his every move “Hey buddy, want to be my big brother!?”

Things were going pretty smoothly until our girl suddenly decided to try breastfeeding from Eko. As you might imagine Eko was not thrilled and made quite a hasty retreat. They eventually did make up. “Sorry about the breastfeeding thing, bro. My bad.”

Eko was a bit wary, but Auggie was absolutely ecstatic to have a new puppy playmate. He’s used to getting beat up by bigger dogs so he loves having a new little pal. The two roared and romped around the kitchen for an hour Realizing she was outgunned, little girl resorted to ambush tactics Auggie was delighted to have a sleepover pal Life in  the new digs is pretty good when your pal is a fluffy pillow!

We’ve had a 3 AM thunderstorm pee break, a big adventure outside where we almost made it to the sidewalk before turning back and plenty more to share. But while little princess sleeps I’m going to make sure Eko gets some TLC. I’ll also remind him I have no expectations for him to be a wet nurse!