What makes a pet a good older-sibling?

Before he was the rough-and-tumble-anything-goes adventurer he is today, Eko was just a little stinker. It’s a big world and there was a lot Eko was uncertain about. On the first day I brought Eko home he was very wary of my mom’s dog, Scout. 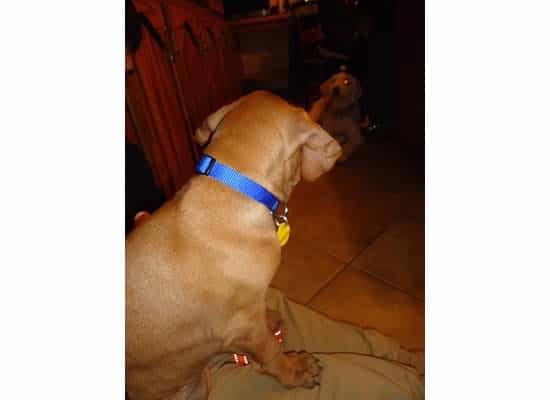 Before he was the rough-and-tumble-anything-goes adventurer he is today, Eko was just a little stinker. It’s a big world and there was a lot Eko was uncertain about. On the first day I brought Eko home he was very wary of my mom’s dog, Scout. Despite the devil eyes in this photo, Scout is a total sweetheart. Nevertheless, Eko jumped in my lap every time Scout so much as looked at him

With lots of cooing and encouragement I was able to arrange a meeting. Eko didn’t bolt but he did use me as a human shield. Although he was still wary, Eko was reassured by Scout’s sweet demeanor

And it wasn’t long after this first meeting I would walk into the kitchen to this scene: From strangers to siblings in no time

Eko adjusted to his new life very quickly and an important part of his successful transition was Scout’s stewardship as his big sister. She was at turns tolerant, forgiving, playful and motherly. Scout helped teach Eko everything from bite-control to where to sit down when you wanted to let humans know it was time for a walk.

With Eko as a big brother in waiting, I now wonder how he will act with the roles reversed. Where Scout was submissive, Eko is assertive and where Scout was nonchalant, Eko is inquisitive and curious. Although, I think Eko well remembers the days when he was scared of his big sister. And if the park is any indication, those memories have stuck with him. When other dogs act submissive, Eko stops playing and reassures them he’s harmless I really lucked out having Scout to help me show the ropes and I’m hopeful Eko will pay it forward as a dutiful and doting older brother. With that in mind I have a question for those of you with multiple dogs. In the days (or weeks or months) before you brought home the new dog, was there anything you did which you felt made it easier for the current dog to be a successful sibling?

Previous Post Why get a second pet? Back to all posts Next Post [VIDEO] Puppy Proofing Preparation

Comments for What makes a pet a good older-sibling?