Yeah, Yeah, We Got Lost. But We Did Other Stuff Too!

Sometimes when you are wrong, your brain does really interesting gymnastics to convince you that you are right.  For example, today Eko and I set out to visit Millbrook Dog Park in northern Raleigh, but when I turned into the parking lot a little voice in my head suggested

Sometimes when you are wrong, your brain does really interesting gymnastics to convince you that you are right.  For example, today Eko and I set out to visit Millbrook Dog Park in northern Raleigh, but when I turned into the parking lot a little voice in my head suggested that this might not be the place. 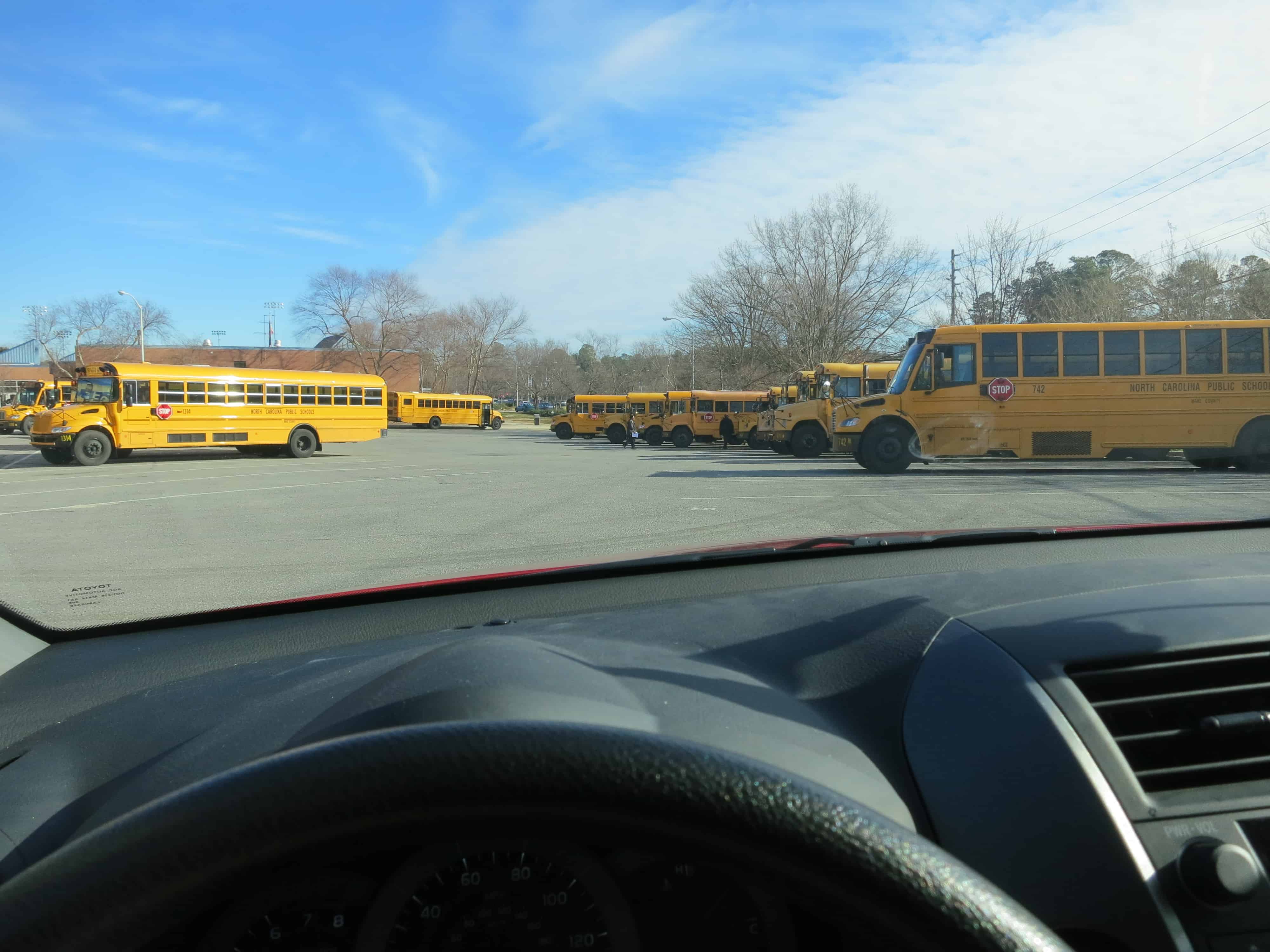 This must be the place!

There were two options.  Either we had reached the dog park, or we were at a school bus depot.  Despite the overwhelming evidence that the latter was the case, I thought, “Hey, we probably just need to walk behind the school buses!”  As I got out of the car with Eko, a man said, “You know this is a school bus depot, right?” as he pointed to a big sign that read, “SCHOOL BUS DEPOT.”

Turns out that to reach the park, you actually have to make the turn before the bus depot. The dog park website advises that the turn is tough to spot, but I don’t read so good, so I missed that part of the directions.  We did make it to the park eventually, but if you want to avoid a trip to the bus depot, be on the lookout for the right turn! 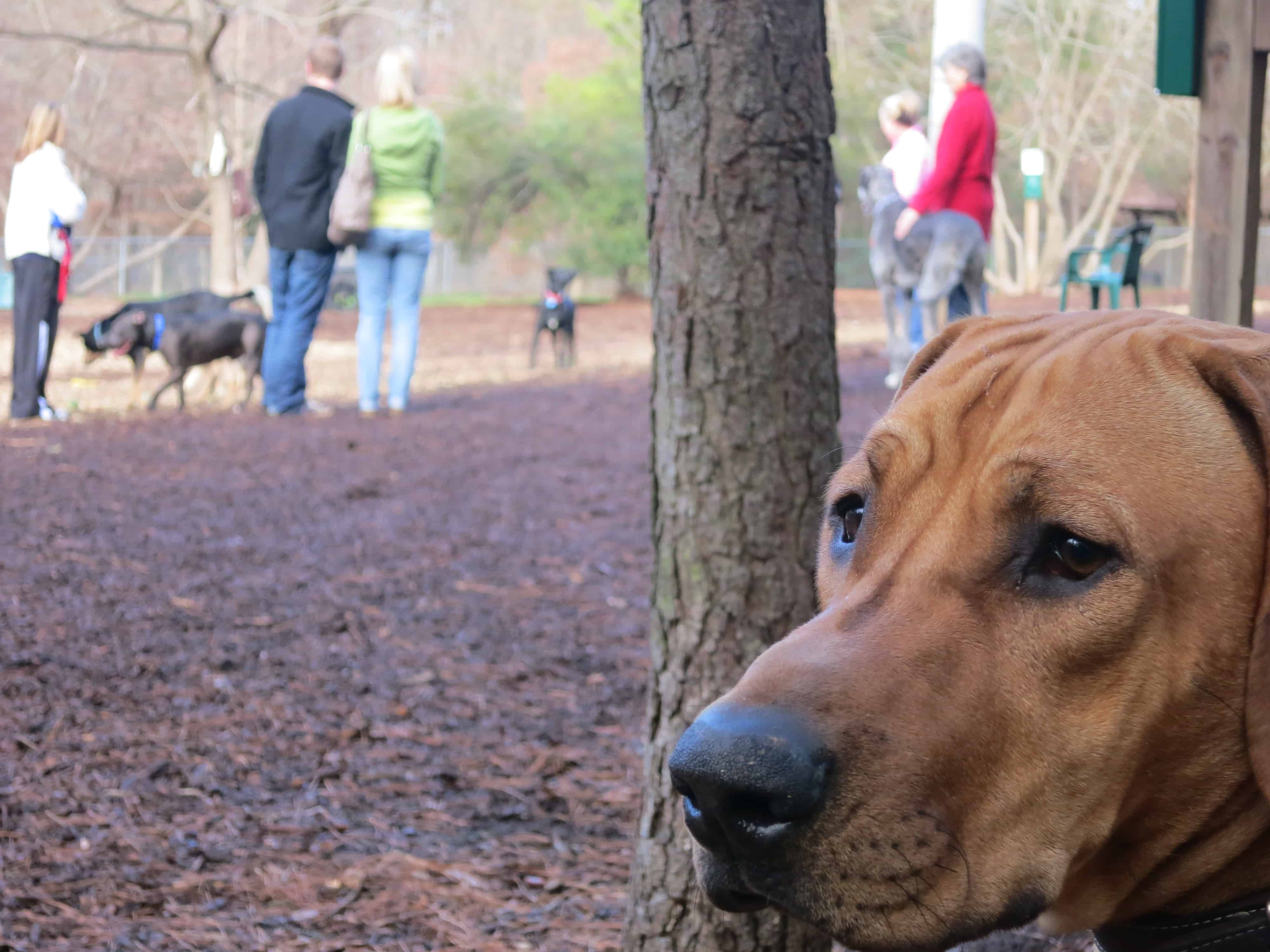 When we walk into a new park, I see how long I can get Eko to stay still for a photo before letting him go play.  Our current record is 0.63 seconds.

Eko and I walked the well kept trails around the outside of the park, but the highlight of the visit was definitely the off-leash area.  A wide space on a rolling slope, the off-leash park has plenty of open space for dogs who want to run, along with a wooded area for pups interested in showing off their agility.  Even with a bunch of dogs around, the park never feels crowded, but it’s small enough that you can keep an eye on your dog at all times.

Eko got in a good run at the park, so we swung by a local pet store to grab some treats. Usually there is nothing that can deter Eko’s obsession with treats, but inside the store there were a couple of tempting distractions. 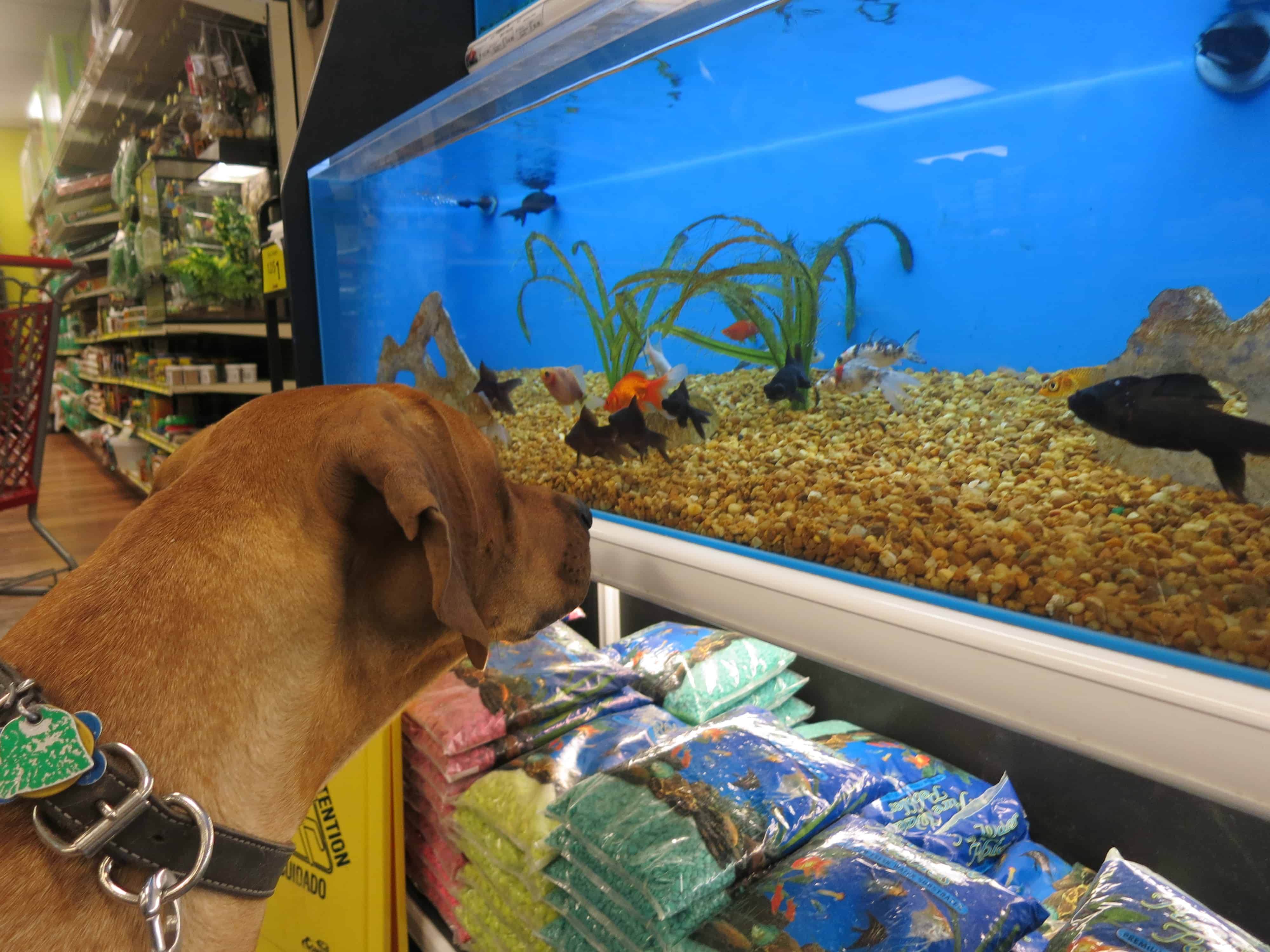 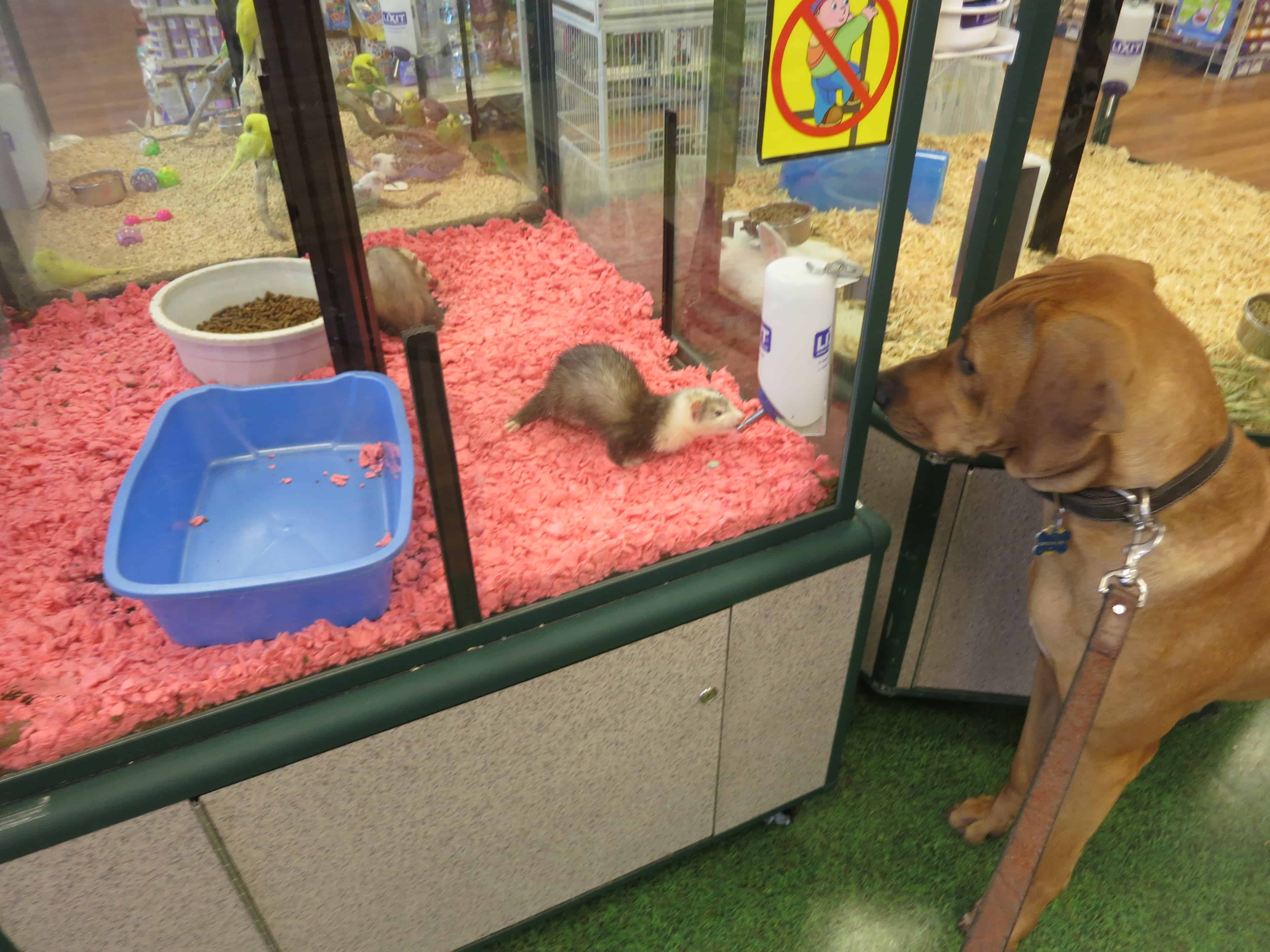 Eko was entirely unprepared to meet a ferret

The fearless ferret walked up to the glass and casually smacked it right in front of Eko’s face.  This prompted Eko to do the “confused-dog-head” maneuver where he twisted his head 180 degrees as he looked to me for an explanation about what exactly this demon creature was.

As we got in the car, I laughed at how Eko couldn’t comprehend what had just happened. Then in a bit of karmic justice for Eko, something happened that I still can’t comprehend.  I pulled out of the parking space, and as I was about to drive off, a massive ice cream cone came around the corner, waved at me and walked off into the sunset. 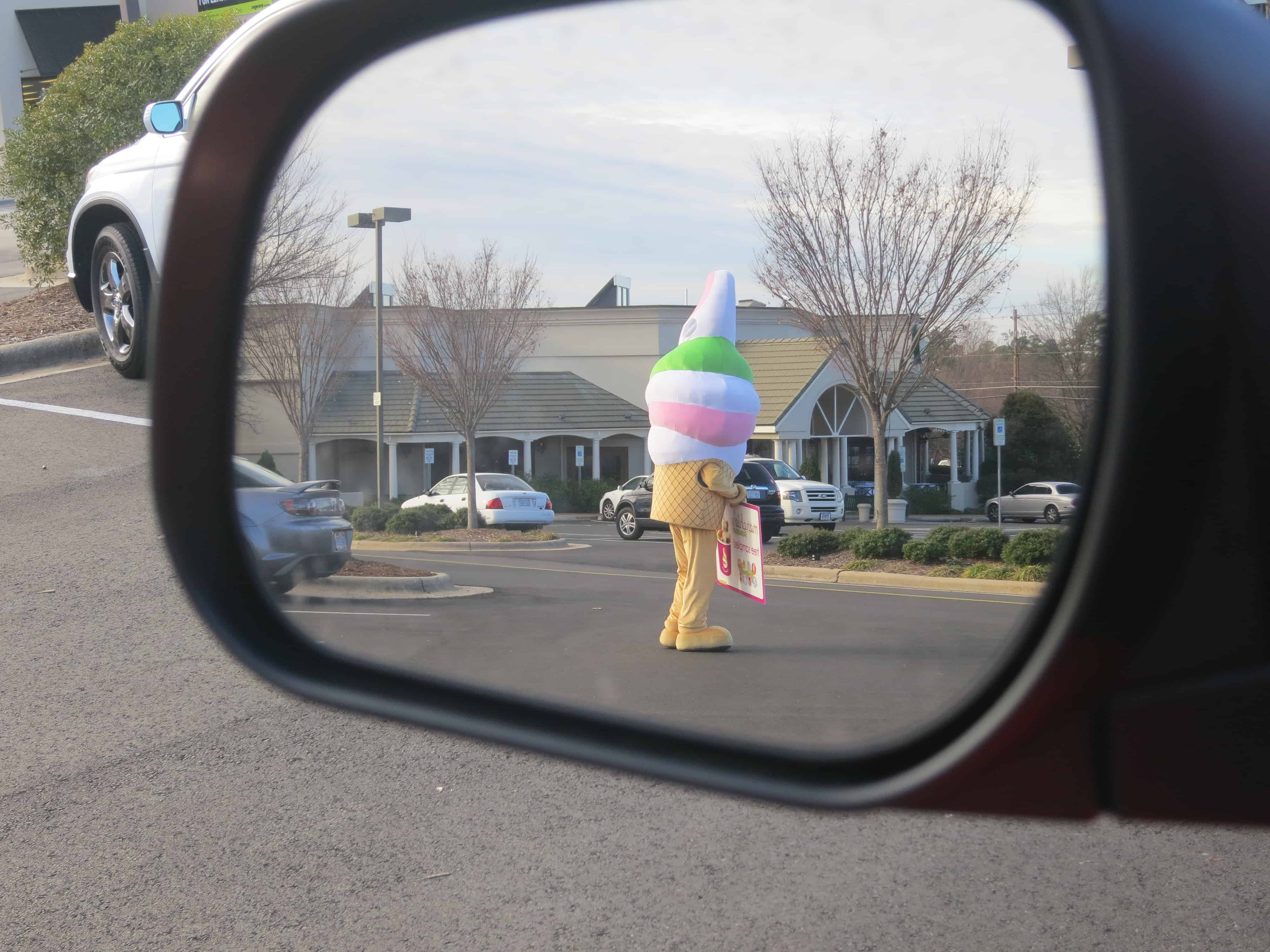 I was too scared to turn around to take a photo

Eko and I are only in Raleigh for another couple days, so if you have any favorite pet-friendly spots we should check out, let us know asap!  However, if there are any human-sized ice cream cones in the area of your suggestions, we will not be making the trip.  I have enough adventure in my life without having to deal with scary anthropomorphic dairy products.

Comments for Yeah, Yeah, We Got Lost. But We Did Other Stuff Too!